I am pleased to welcome Stephanie Cowell, award-winning author of Claude & Camille: A Novel of Monet to the American Girls Art Club in Paris.

Claude & Camille is one of my favorite recent art history reads, and Stephanie is a real expert on Monet and his circle of French artists. When I told her that my husband and I were planning a weekend trip from Paris to Honfleur, she did some research for me and wrote this lovely piece about Monet’s early days in Honfluer. Enjoy, and stay tuned for a follow-up post with news and photos from my amazing trip.

HONFLEUR in Normandy, where Claude Monet first began to paint. 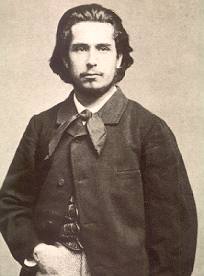 If you walked along the port in the town of Honfleur in 1859 or thereabouts, you might pass two men strolling with portable easels over their shoulders, deep in conversation: the older of the two would be the landscape artist Eugène Boudin and the eager adolescent with dark burning eyes, Claude Monet. They were likely talking about the joy and difficulties of painting the sea and the light above it.

A hundred and fifty years have passed since then and Honfleur remains the same charming seafaring town with its narrow, cobbled backstreets, old houses and ancient wooden church.  It is located on the southern bank of the estuary of the Seine across from le Havre. The Seine had always in inspired artists and by the early nineteenth century they were coming steadily. It was the years when painters were discovering the constantly changing effects of weather on the landscape. Boudin who had been born in Honfleur was making a reputation as a painter when he discovered Claude Monet: a seventeen-year-old-with an attitude who hated school.

At that time Claude had no thought of oil paints or canvases; he made making a great deal more than pocket change sketching witty caricatures. Boudin persuaded the young man to come with him at dawn to paint outdoors. From that morning, Claude threw himself into a life of art. He went to Paris to study where instead of making money he almost starved. He never ceased to try to capture the light. He searched for it all his life and ended up painting its reflection in his water lily pond sixty years later. And he returned again and again to the towns of Normandy and medieval Honfleur.

Claude Monet: Entrance to the Port of Honfleur (1870)

First mentioned in history a thousand years ago, Honfleur had long been a trading and seafaring town. Now tourists come from all over the world. With its population of around eight thousand (rather more intimate than Paris!), it is one of the of the most charming little towns in Normandy with many little shops and seafood restaurants.

Boudin: the Entrance to the Port of Honfleur (1865)

There are interesting things to see and do. An old chapel houses a museum dedicated to Boudin.  Wander to the Vieux-Bassin (old dock) in the heart of the town, and stroll by the high, narrow houses which overlook the harbor on three sides. Visit St. Catherine’s Church, built entirely of wood or the vast stone salt granaries dating from 1670 which could store up to 10,000 tons of salt, but are now used for exhibitions and concerts.

But the best thing is to spend dreamy hours watching the light on the water. Sit in a café by the dock. Stay in a hotel overlooking the boats. Better still, bring some water colors or a small box of oil paints and discover for yourself what Monet found when he was very young and never forgot.

Stephanie Cowell is the author of CLAUDE & CAMILLE, the story of the young Claude Monet’s struggling years to prove himself in the art world and the elusive model Camille whom he loved and married. She has published five novels and is the recipient of an American Book Award. Follow her on Twitter at @stephaniecowell.

2 thoughts on “Monet in Honfleur: A Guest Post by Author Stephanie Cowell”