Renoir’s Luncheon of the Boating Party (1880-1) makes me want to pull up a chair, sit down next to Gustave Caillebotte (right foreground) and pour myself a glass of wine. Maybe I would even feed the doggie some grapes and chat with Aline Charigot, Renoir’s future wife (the pretty woman in the red-flowered hat).

This is an accessible, sunny painting that reflects a leisurely Sunday afternoon at one of Renoir’s favorite hang-outs, Restaurant de la Maison Fournaise, just outside Paris in Chatou on the Seine. Did you know that you can still go there today? As Renoir said himself: “You won’t regret the trip, I assure you. There isn’t a lovelier place in all Paris surroundings.”

For a long time, the restaurant suffered from neglect and deterioration. As Renoir’s son Jean said in his book, Renoir, My Father (1962):  “I paid a visit to the place last year. How depressing it was! Nothing but factories, mounds of coal, blackened walls and dirty water. The leprosy of modern industry has eaten away the little woods and luxuriant grass.”

From 1984 to 1990, the restaurant was completely renovated with a combination of art grants and philanthropy. Today, the scene is much improved. 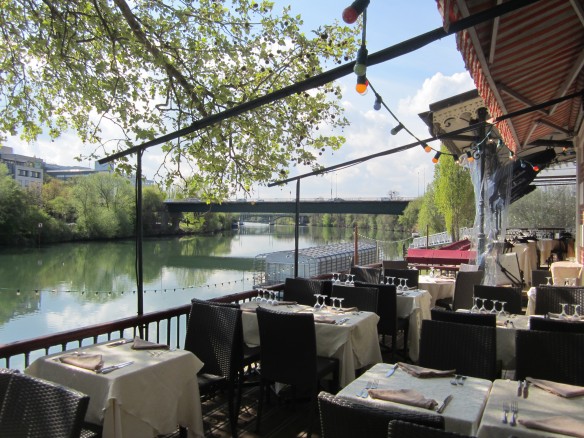 The view from Renoir’s easel.

“The place was delightful; a perpetual holiday. . . . At night there was always someone about who volunteered to play the piano for dancing. The tables on the terrace were pushed back into a corner. . . . the music floated out through the open window.” – Jean Renoir, in Renoir, My Father

I even brought out my own pastels and tried to capture the scene, but alas, I’m no Renoir. 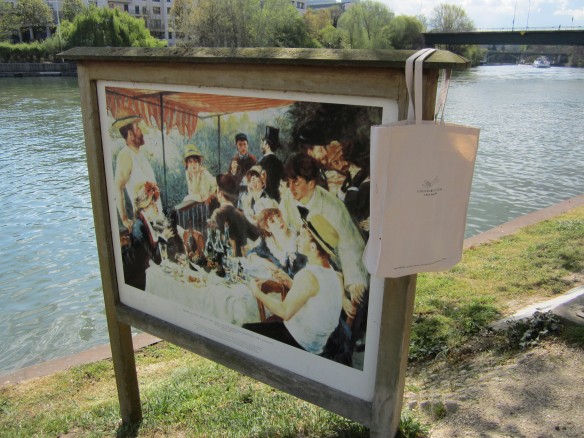 Restaurant de la Maison Fournaise is easily reached by car or by train. You can take the same route that Renoir did from Paris to the Chatou-Croissy station via the RER A1 Line (Zone 4), where it is only a few minutes walk to what is now called “Ile des Impressionistes.”

It was this easy access that made the restaurant Renoir and Aline’s favorite meeting place back in 1880. According to Jean Renoir: “It was easy to reach. . . . There was a local Saint Germain train, every half hour, that stopped at the Chatou bridge station. At the Fournaises’ [my parents] found a group of friends who seemed to watch over their idyl with tender interest. The painter Caillebotte looked after Aline Charigot like a younger sister.”

You can read an imagined story of the couple’s developing romance in Luncheon of the Boating Party by Susan Vreeland, who said that she had often admired the painting and wondered about the models. Who were they, and why did they pose like they did?  “I saw tremendous story potential in these appealing characters, flushed with pleasure and enjoying a summer day on a terrace overlooking the Seine.” Vreeland imagines a love triangle between Renoir, Aline, and another woman in the painting, Alphonsine Fournaise, the daughter of the restaurant owner.

You can enjoy your own toast to Renoir and his women at the restaurant, where they offer an apertif called “The Alphonsine,” made of orange juice, champagne and grenadine.

My own book club back in Chicago read and enjoyed Susan Vreeland’s book, which I highly recommend. Right now, I am in the middle of Renoir, My Father by Jean Renoir, and I am pleasantly surprised what a good read it is. Jean’s memory was incredibly good, his writing is thoughtful, and the stories his father used to tell him make captivating history.

If you or your book club can’t get to Paris, maybe you can schedule a visit to the Phillips Collection in Washington, D.C. to see the original painting. At the Art Institute of Chicago you can see another of Renoir’s paintings from Chatou called Lunch at the Restaurant Fournaise (The Rower’s Lunch) (1875).

At the very least, you can enjoy some art history at the website of Maison Fournaise here.

4 thoughts on “Luncheon of the Boating Party: A Day in Chatou”