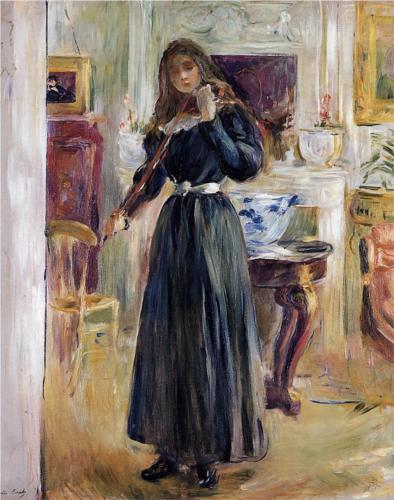 One of the first things I notice is the portrait of Morisot hanging on the wall to the left of the fireplace. Her brother-in-law Édouard Manet painted it in 1873, when Morisot was thirty-two years old and had just started showing with the Impressionists. Manet gave it to Morisot as a gift. I am always struck by the pose and the gaze that Manet captured. Pretty sensuous. Yet one year later, Morisot would marry Édouard’s brother. Twenty years later, after both Édouard and Eugene have died, Morisot paints a picture with this portrait in the background.

There are a few other interesting details in the painting of Julie and a Violin. According to Julie Morisot, who is quoted in the Exhibition Catalog for the Berthe Morisot Exhibit at the Musée Marmottan, the painting to the right of the fireplace – which is cut off and barely even depicted – is a painting of her father by Degas. In the center of the painting behind Julie, there is a large Chinese bowl, a treasured gift from Édouard Manet. Notice how close it is to the fireplace, how bright and prominent it is in the center of the room next to Julie. Finally, consider the empty yellow chair facing Morisot’s own portrait. It has been placed there on purpose – why else would it be facing the wall and not Julie?

I think we know. The two most treasured people in Morisot’s life were her daughter and Édouard – not Eugene – Manet. But of course, I’m just speculating, drawing wild conclusions from a pretty painting. And yet, I know that everything in the background of a painting is carefully selected and placed there for a reason, just like the details in a book. I think this painting hints at a really good story.

If you go to rue Weber today, you can find Morisot’s lovely apartment still standing. There is no historical marker, and few of the neighbors I spoke to even know it was once Morisot’s home. It is one of the loveliest streets in Paris, in a quiet corner of the 16th arrondissement that ends at the Bois de Boulogne. Despite their loss and grief, Morisot and her daughter must have had some simple pleasures their last two years there together, with frequent walks and sketching opportunities in the nearby park.

Morisot would catch pneumonia in 1895 and die at the age of 52. Julie would come under the guardianship of a Manet family friend, the poet Stéphane Mallarmé, until his death in 1899.

Morisot’s secret interior would live on in her paintings. You can see many of them for yourself at the special Berthe Morisot Exhibit at the Musée Marmottan until July 1, 2012.