Interested in a different day trip from Paris? Try visiting some scenic old art colonies in France. There is so much more to see besides Giverny. And these off-the-beaten-track places are much less crowded.

Venturing south of Paris you will find the old art colonies of the Fountainbleu Forest, including Barbizon, Grez-sur-Loing, Moret-sur-Loing, Montigny-sur-Loing and Thomery. Here they are, mapped out on Google Maps. These villages make for a wonderful weekend or day trip from Paris. All you need is a good map, but for really easy travel, I prefer a rental car with GPS. (My own GPS travel tip: use the postal code of the city to which you’re traveling.) It is possible to visit all of these colonies in one day, but if you prefer not to rush and to perhaps leave some time to sketch or visit the nearby Chateau de Fountainbleu, I would set aside a whole weekend.

On a recent visit with Barbara Redmond, fellow artist and founder of A Woman’s Paris, I began in Grez-sur-Loing (postal code 77880) at the southern edge of Fountainbleu.

Grez became a popular summer travel destination for American artists in Paris after a train station and new hotel were built In 1860. Jean-Baptiste Camille Corot‘s painting View of the Loing At Grez (1850-60) may have worked like a Grez travel poster, inducing many art students to come and try to paint it themselves. Word about Grez circulated through the Academie Julian in Paris as well as Carolus-Duran’s studio.

The Bridge at Grez by American Robert Vonnoh (1907-11). Metropolitan Museum of New York.

Standing in front of the bridge at Grez-sur-Loing in 2012. Just when we were thinking of getting out our sketchbooks, it started to rain.

Athough Grez was gray and quiet the day we visited, it was once hopping with artists and writers, both male and female. Its notable visitors included Robert Louis Stevenson, his cousin, painter Robert Allen Stevenson, Louisa May Alcott’s little sister Abigail May Alcott (an artist like Amy in Little Women), American painters Kenyon Cox, John Singer Sargent, Theodore Robinson, Robert Vonnoh and Will Low, as well as a mother-daughter team of painters from California, Fanny and Nellie Osbourne. In fact, it was at Grez that Fanny Osbourne and Robert Louis Stevenson would meet and fall in love, although Fanny was ten years older and technically still married to her first husband at the time. (A hint of the bohemian pleasures of a nineteenth century art colony!)

These artists enjoyed the picturesque setting of the village as well as the open spaces nearby. The older French artists such as Corot, Millet and Rousseau had settled in nearby Barbizon a few decades earlier, but there was a new generation of artists looking for their own scenes and style. As Robert Allen Stevenson explained:

At Barbizon it was especially difficult to get away from the old men who had made it their own, and yet do anything like art. Forest interior composes with difficulty otherwise than as Rousseau, Diaz and Courbet imagined it. . . .  Shut in, full of forms, lit in one way, deprived of sky of space of air of the effect of large simple planes, it was no fitting nursery for the new school of painters (“Grez” The Magazine of Art, 1894).

It wasn’t just lofty artistic motives that brought this generation of artists to Grez. It was also a place for youthful exhuberance and bohemian camaraderie. The artists enjoyed the casual hospitality of two inns in Grez: Hotel Chevillon and Pension Laurent. Hotel Chevillon was the place of much bohemian merriment, including singing and dancing in the hotel dining room as well as a masquerade ball in sheets and togas. The hotel guests  often took canoe rides on the river together, playing such games as tip the canoe and shoot the chute. For a somewhat more reserved and respectable environment, the women would often stay at Pension Laurent just down the street.

A postcard image of the old Hotel Chevillon from the website of the Foundation Grez-sur-Loing.

Both hotels are still standing in downtown Grez. The Hotel Chevillon is now owned by Foundation Grez-sur-Loing, a Scandinanvian art organization that offers grants to visiting artists, authors, composers and scientists. According to their website, tours may be arranged with advance notice.

Hotel Chevillon in 2012, home of Foundation Grez-sur-Loing, a Scandinavian art organization. A popular hang-out for the artists who came to Grez. Robert Louis Stevenson met his future wife here.

Hotel Chevillon is located on rue Carl Larsson, which is named after the Swedish painter who lived and met his wife in Grez.

The present day site of the former Pension Laurent in Grez, just a few doors down from Hotel Chevillon. Abigail May Alcott may have  stayed here during her visit the summer of 1877.

The plaque at the former Pension Laurent in Grez

The artists came to Grez in several different waves. In the 1870s, it was mostly Americans and British; in the 1880s it was mostly Scandinavians, and by the 1890s, there were many Japanese artists. The Scandinavians have had the most lasting influence – one of the streets is named after Swedish artist Carl Larsson.
Robert Vonnoh might be the American artist most closely associated with Grez. Boston-born Vonnoh first came to Grez on his honeymoon with his first wife Grace in 1887. He continued to visit throughout the years 1887-1891 and then again from 1907-1911, returning with his second wife Bessie Potter Vonnoh, a sculptor from Chicago. He returned for some part of each year until the outbreak of World War I. His last paintings set in Grez are dated after the war from 1922-1925.
Vonnoh has often been called one of America’s first-rate Impressionists. It would have been in Grez that he truly developed his plein air style. Here are some of Vonnoh’s paintings set in Grez: 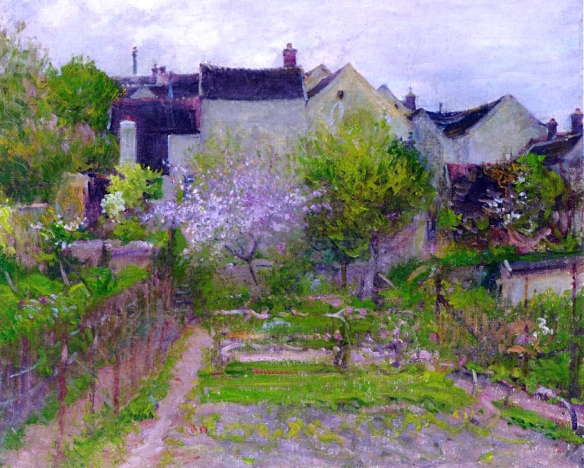 Grez remains an artistic community today. On the day we visited, we met a French painter near the ruins of the old Tour de Ganne. She was clipping dried hydrangeas from the churchyard to use at her own art exhibition later that afternoon. She handed us a flyer and invited us to stop by.

Follow along on my tour of other French art colonies in future posts. Coming soon: a visit to Rosa Bonheur’s Atelier in Thomery, France.

Grez Days: Robert Vonnoh in France (Essay and Catalogue by May Brawley Hill for Berry-Hill Galleries 1987)

May Alcott: A Memoir by Caroline Ticknor (1928), available at the Library of Congress Internet Archive

The Blue Lantern: The Violet Complexion of Grez-sur-Loing a blog by Jane Librizzi

7 thoughts on “Visit an Art Colony in France: Grez-sur-Loing”