There’s just something about standing in another artist’s art studio. The north-facing windows, the easels, the containers full of brushes. If you’re lucky, there might be a painting in progress, a smock or two hanging nearby, or other signs of the artist’s work and passion.

You can see all this and much, much more at Rosa Bonheur’s studio in Thoméry, France, just an hour’s drive south of Paris near Fountainbleu. Rosa Bonheur was a famous 19th century French painter known for her realistic portrayal of horses and animals, particularly Horse Fair (1853-55), Metropolitan Museum of Art.

Not surprisingly, Rosa had an unusual and fascinating life. She was born in Bordeaux in 1822 but was raised in Paris. Her father was a painter and her mother was a piano teacher who died at a young age. Rosa was “a spirited child” who had trouble sitting still in school. The only way her mother could teach her how to read was by having her draw an animal that matched each letter of the alphabet. Rosa’s father allowed her to drop out of school at the age of twelve to focus on her independent art studies. She copied at the Louvre, but also studied animal science with veterinarians and drew animals from life in the pastures of the Bois de Boulogne. She often visited the slaughterhouses on the outskirts of Paris.

Rosa’s father belonged to an unusual religious sect called Saint-Simonianism, a kind of utopian-pre-feminist socialism that believed in a female Messiah. Can you imagine what it would be like growing up with a father like that in the middle of the 19th century? (For that matter, can you imagine having a father like that now? Pretty cool.) Anyway, Rosa lived freely and equally, often wearing pants, which wasn’t allowed at the time in France unless you obtained a permit from the prefect of police. She had two female partners the majority of her life: first, her friend from childhood, Nathalie Micas, and then in her last ten years, the American artist Anna Klumpke.

Rosa Bonheur in the garden of Chateau de By

In 1859, after Rosa was already enjoying success as an internationally celebrated painter, she purchased a Gothic-looking chateau near the Fountainbleu Forest and built her own art studio on the second floor. Rosa lived and worked there for 40 years, surrounded by basset hounds and her beloved St. Bernard  until her death in 1899. She left her entire estate to Anna Klumpke.

Anna Klumpke was a California-born artist who had admired Rosa Bonheur ever since she was given a “Rosa doll” as a little girl (such was Rosa’s Bonheur’s fame). Anna came to Paris to study art at the Académie Julian in 1883, and was a regular exhibitor at the Paris Salon. Anna sought out Rosa at Chateau de By in order to paint her portrait, and the two fell in love and lived together for the rest of Rosa’s life. After Rosa died, Anna auctioned off many of her paintings and then divided her time between France, San Francisco and Boston.

Barbara Remond (fellow artist and founder of A Woman’s Paris) and I toured Rosa Bonheur’s home on a rainy Saturday in October. The home and studio are open to the public between 2-5pm on Wednesdays to Saturdays from April 1 through November 30th. A guided tour is included with the price of admission, although the tour guide may not speak English. Our tour guide was a very good sport, and managed to share the spirit and history of the place despite our bad French. 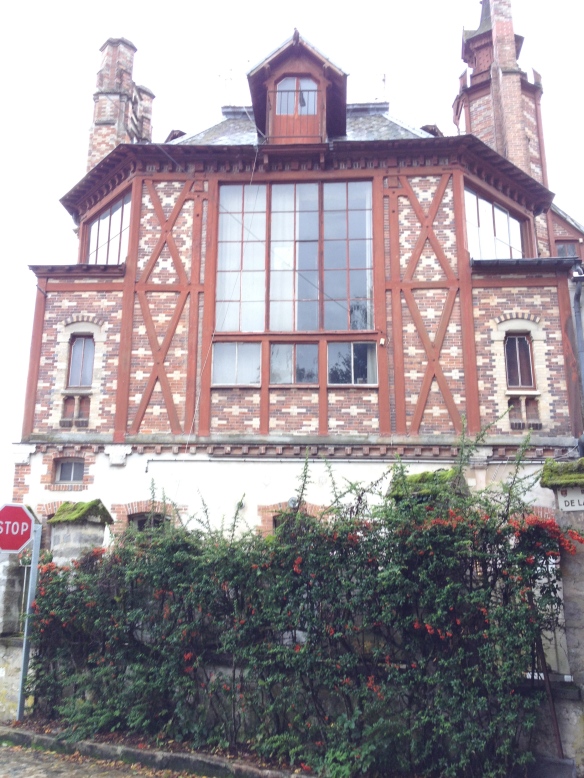 The courtyard of Chateau de By 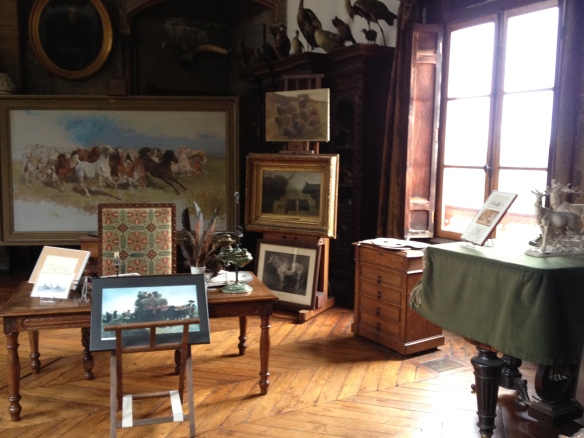 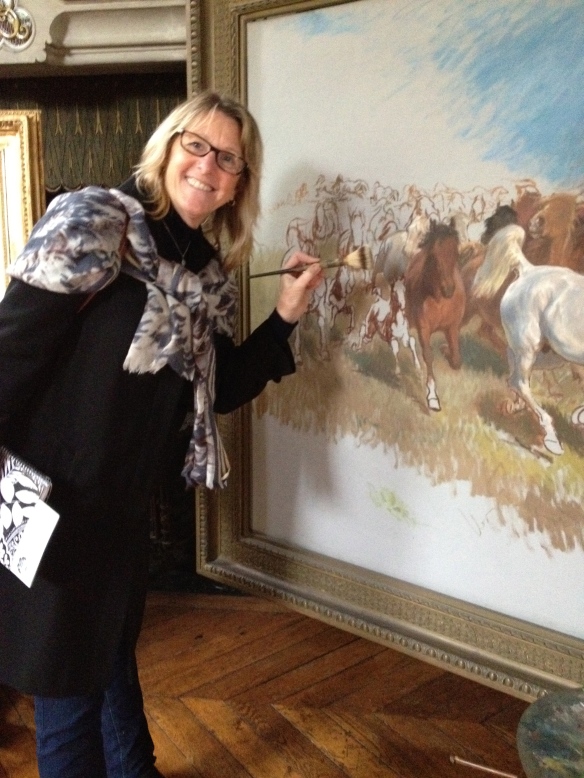 That would be me. The tour guide was so charmed by my enthusiastic Franglais that he let me pick up one of Rosa’s brushes and pose for this photo with this unfinished painting.

Rosa Bonheur’s own brushes and palettes.

Sorry for the bad quality of this photo. I still wanted to share this scene of Rosa’s jacket, hat and boots. 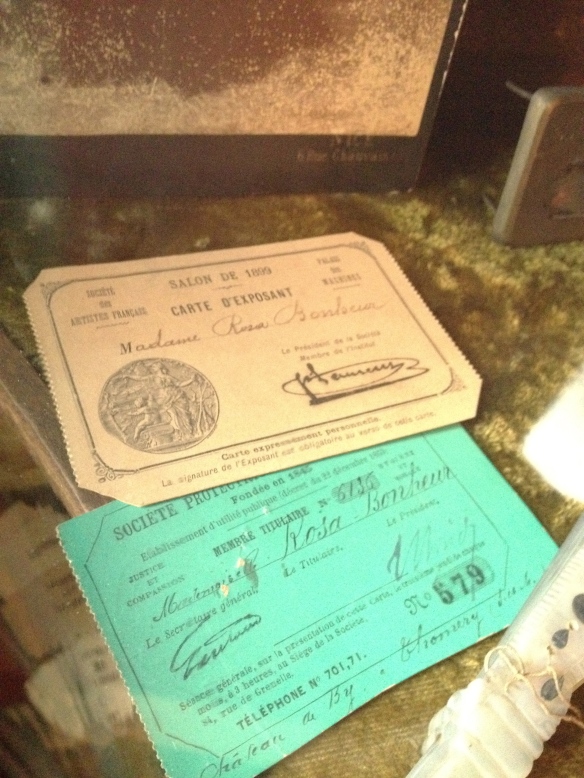 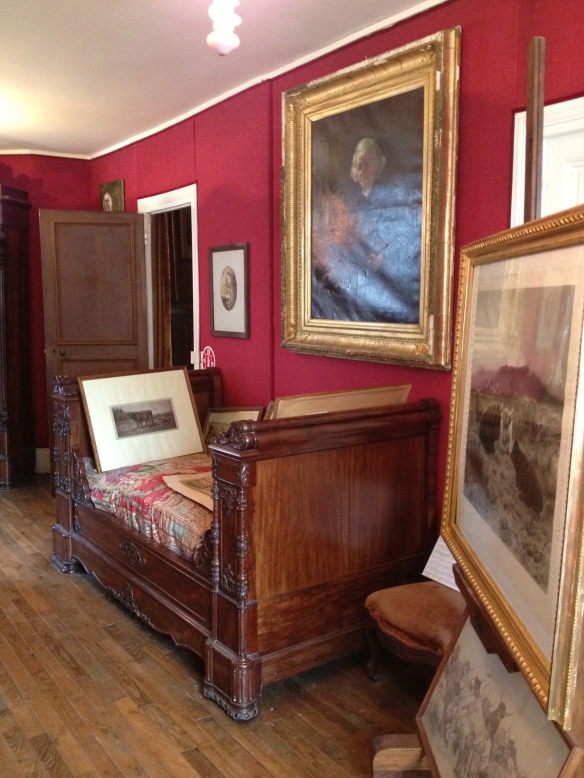 The guest room/office next to Rosa’s art studio. 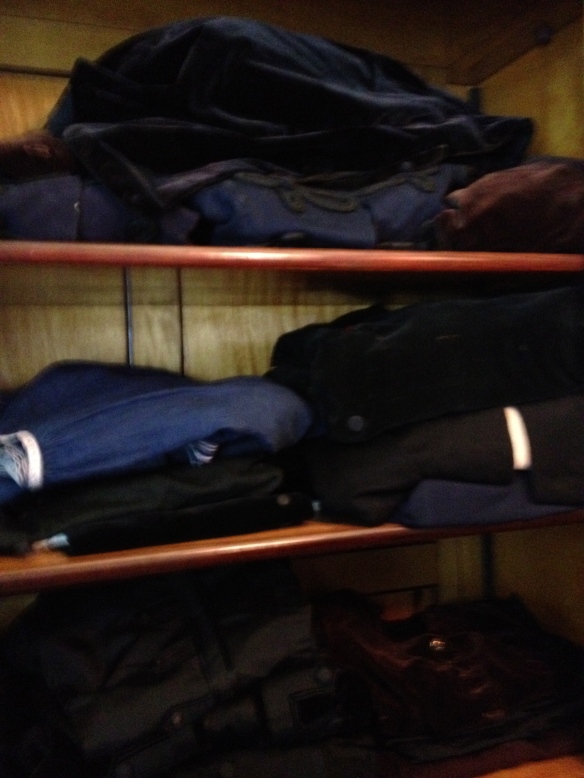 Inside Rosa Bonheur’s closet. Her clothes still remain stacked on the shelves – check out her distinctive jackets!

My friend Barbara Redmond (founder of A Woman’s Paris) in one of Rosa’s hats, with full and cheerful permission from our tour guide! 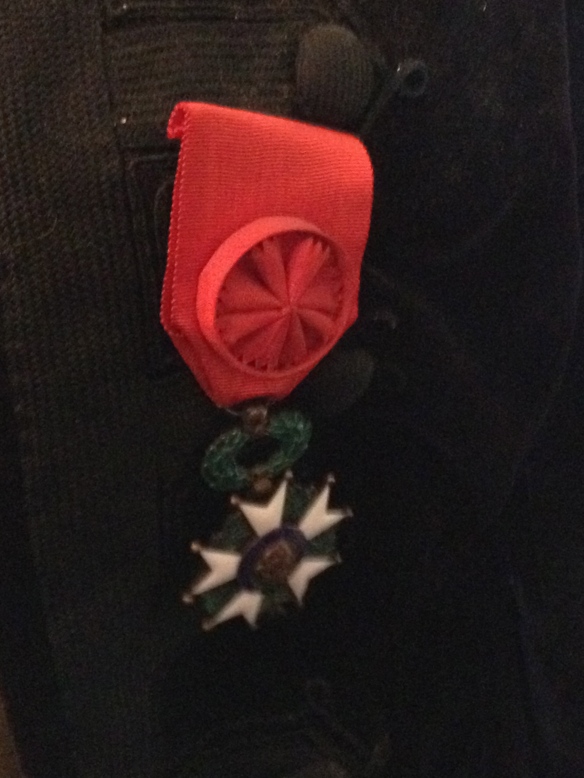 Rosa’s Legion of Honor Medal is still pinned to one of her jackets draped over the back of a chair. Empress Eugenie came to Chateau de By to present the medal to Rosa. 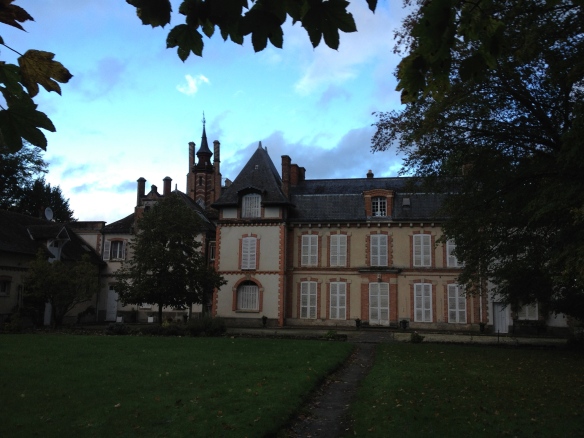 The view of Chateau de By from the garden at nightfall

The view of Chateau de By from the street

Rosa Bonheur’s studio is a remarkable sight. There is dusty memorabilia and the simple remains of a real life, but there are also unique treasures, like her Legion of Honor Medal she received from Empress Eugenie and the Indian costume from Buffalo Bill Cody. It’s all testimony to a life well lived and a talent well used. A must see for art lovers, and only an hour’s drive from Paris.

Rosa Bonheur: A Life and a Legend by Dore Ashton and Denise Browne Hare 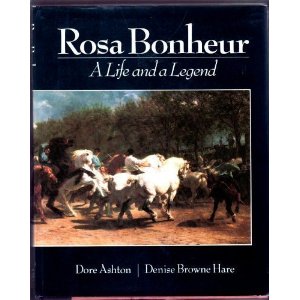