I just spent the weekend in Burgundy. Well actually, I was on my front porch in Chicago reading The Road to Burgundy by Ray Walker, and it felt like I was there all over again.

This book is Ray’s personal story based on his crazy dream to leave California and go make wine in Burgundy. Ray wasn’t even much of a wine expert – he’d only been tasting wine for a couple of years before he quit his day job – but there was just something about the purity and the story of the wines from Burgundy that seized his imagination and wouldn’t let go.

When I started the book I had serious doubts. Ray seemed a little delusional. I felt sorry for his long-suffering wife Christine. Who goes and makes wine in Burgundy (arguably the epicenter of winemaking in the entire world) without any experience, any clout, or any French language skills?

Well, Ray did. And it makes a great story, whether you know a lot about French wine or not. It takes you to the small villages of the Cote d’Or in Burgundy, and into the hearts and minds of the locals, who couldn’t resist helping Ray achieve his remarkable dream. (Well, there were a few notable exceptions, including a nasty Frenchman named Xavier and the typically frustrating French bureaucracy, but every story needs a villain or two).

This book will make you reexamine what you thought was possible with nothing but a dream and a whole lot of determination. It’s a great lesson for those of us who over-analyze, finding more reasons to keep it safe than to take a leap of faith. Ray’s whole story is summed up by the saying “Leap and the Net Will Appear.”

At the very least, this book will make you want to call Air France to book a trip to Burgundy. In the meantime, you’ll have to satisfy yourself with a trip your favorite local wine shop and some photos from my Burgundy wine tour in 2012. 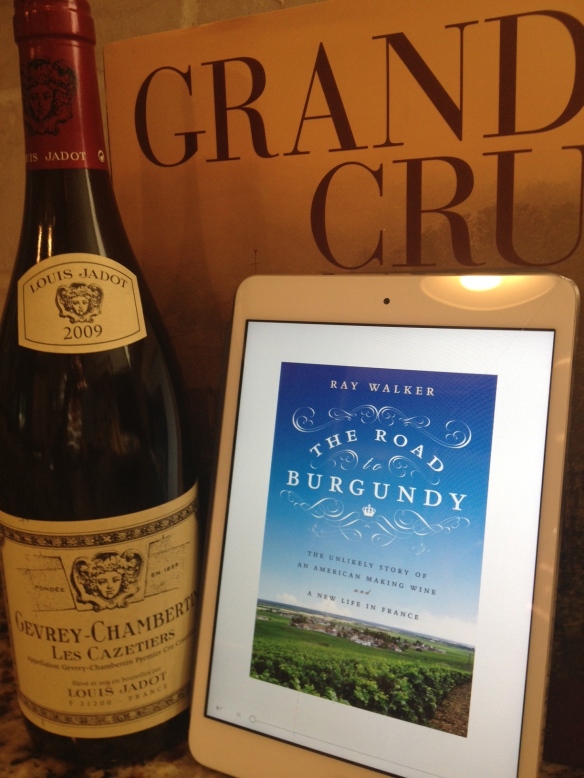 Before you settle down with The Road to Burgundy, stop by your local wine shop for a bottle of a nice Pinot Noir from Burgundy. This one’s a 2009 from Gevrey-Chambertin, not far from the vineyards where Ray Walker grows his grapes. (Yum.)

As I was reading Ray’s book, I just had to pull out my photos and travel notes from my own trip to Burgundy in September, 2012, which to my great fortune just happened to coincide with harvest season.

I booked a wine tour with Tracy Thurling of Burgundy by Request, who did a great job of customizing our tour to the wines and vineyards we were interested in seeing. My husband loves Chardonnay while I’m more of a fan of Pinot Noir. After spending a day sightseeing and wine tasting in Beune, we were ready to see where the wine was actually made.

We started the morning with the whites in the south (Puligny-Montrachet) and then worked our way north to the reds of the Cote de Nuits (Moret-Saint-Denis) and eventually back to our hotel in Dijon. It was a lot to accomplish (a/k/a drink) in one day. Ideally, I would recommend you schedule one full day for the reds and another full day for the whites, leaving yourself time for a nice little nap before dinner. Because, after all, wine tours are really just legitimized day drinking with a designated driver.

The best part about Burgundy is getting out into the villages and vineyards, where the locals are as homespun and friendly as they appear in Ray’s book. Even on harvest day, we were welcomed into the fields to take photos and ask questions. It’s so different than the big corporate feel you get in Napa Valley in California.

A wine map of Burgundy. From Dijon in the north, down through Nuits-St.-Georges and Beaune in the middle, toward Chalon-sur-Saone in the south. These roads are small and narrow, so to get from Ray’s first winery in St. Aubin to his grapes up in Gevrey-Chambertin and Moret-St-Denis would have been quite a schlepp.

Harvest day September, 2012 in Puligny-Montrachet. White rental vans and red tractors crowd the tiny roads of Burgundy in September. You can feel the buzz of excitement in the air. These are world-class grapes. 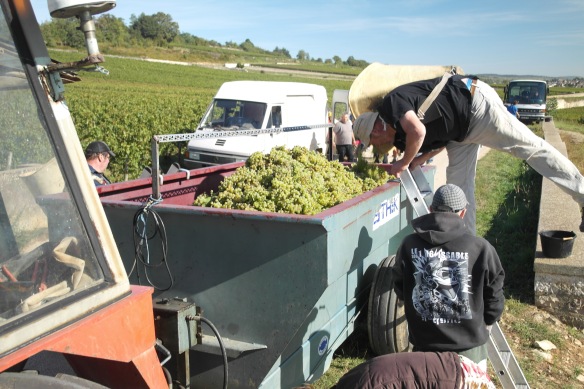 Here’s a porteur with the big cone-shaped backpack they use to collect the newly picked grapes. He had just leaned over, and with a somewhat graceful one-legged kick-out, dumped his grapes into the truck. 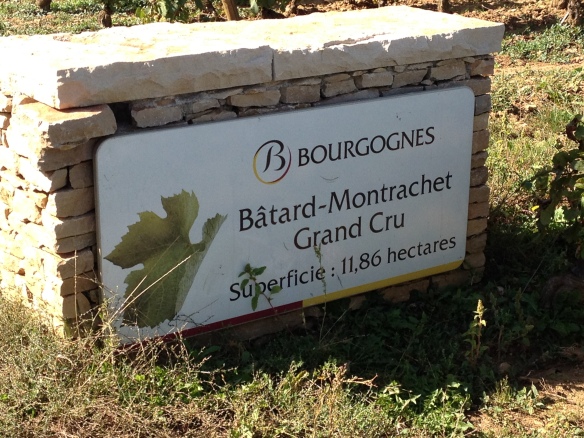 The vineyard of the legendary Batard-Montrachet (literally the Bastard of Montrachet, who under French inheritance laws was entitled to a share of his father’s property).

So what are the odds that we had a wine tasting at Maison Olivier Leflaive’s in Puligny-Montrachet, the same place where Ray and his wife first stayed in Burgundy in 2010 (Chapter 10)? We even got to meet Olivier as he passed through the tasting room to say hello. Olivier was the first of many very generous locals who agreed to help Ray with his crazy quest.

In the wine tasting room of Olivier Leflaive’s. I’m grinning from ear to ear over the Grand Cru Batard Montrachet we’d just tasted. Too bad this isn’t Guilliame, the nice Brazillian fellow that Ray become pals with in the book – it sounds like he was gone by the time we got there. 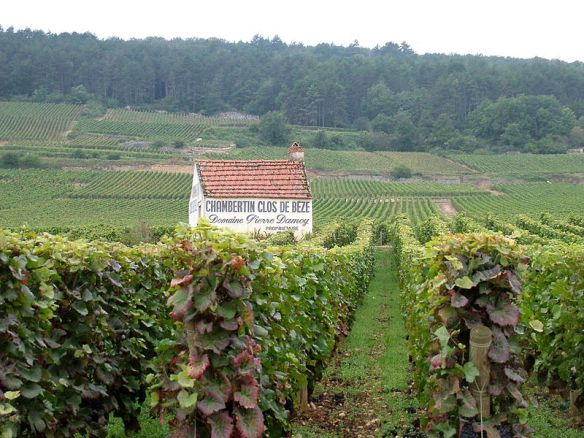 And if you think Burgundy couldn’t get any prettier, this iconic little out building in Chambertin-Clos de Beze might put you over the top.

Pinot Noir grapes in the Cote de Nuits just days away from harvesting. 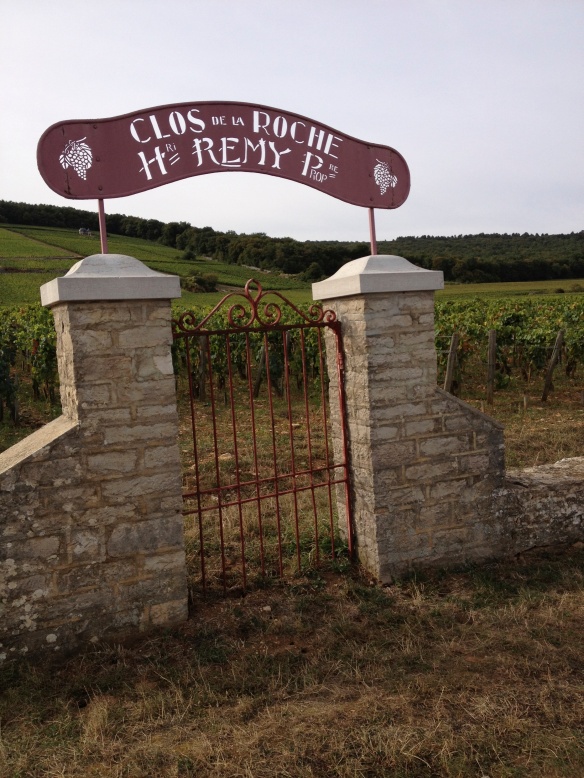 We got to see the Clos de la Roche Grand Cru vineyard just north of Morey-Saint-Denis in Cote de Nuits, right next to Ray Walker’s grapes in Les Chaffots.

As the day was fading, we stopped at the Latricieres-Chambertin Grand Cru vineyard in Cote de Nuits. We got to taste a 2007 from Domain Rémy in Moret-Saint-Denis. This vineyard is awfully darn close to more of Ray’s grapes at Charmes-Chambertin.

If you really want to see some great photos of Ray Walker’s wines at Maison Ilena, go to their website and see for yourself. Their photos are way better than mine. In fact, they look so good they’re making me thirsty for a good French pinot, but then so does The Road to Burgundy. Worse things could happen, that’s for sure.

The Road to Burgundy by Ray Walker: Highly Recommended

I received nothing of consideration in exchange for this review. I just wrote about it because I loved it and I think you will too. If you’d like to read a post about another French wine book tour, check out my October, 2012 post on Wine and War by Don and Petie Kladstrup. Cheers!

1 thought on “The Road to Burgundy by Ray Walker”