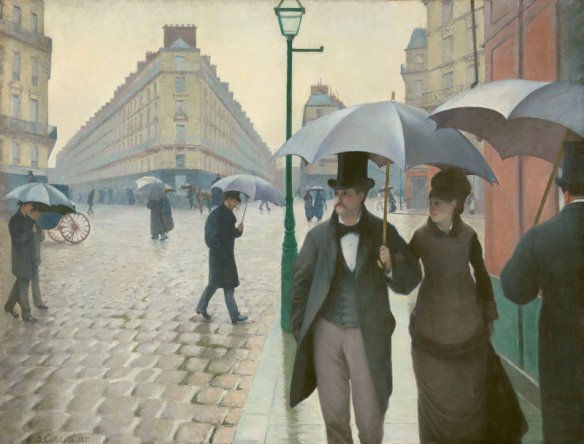 Who doesn’t love this painting? I’ve admired it ever since I first started visiting the Art Institute of Chicago as a young girl. It’s so big that it welcomes you in – it feels like you’re right there on the sidewalk. Maybe you were walking in front of this couple and turned around for a brief look at the intersection behind you. Do your shoes still feel wet from the rain?

I understand that Caillebotte did not actually stand in the street to paint on a rainy day.  (If he had, I guess you would call it en pleuviex air, not en plein air?) This was a studio painting, but no doubt, Caillebotte had plenty of experience observing the effect of rain on the streets of his neighborhood. We do know he drew a sketch of it first, most likely on site en plain air. The drawing is in the collection of the Art Institute of Chicago. As the Art Institute says, “This preparatory drawing seems to have been freely sketched on the spot before being laid out in the studio with a straightedge and compass to regularize the perspective lines.”

On my first trip to Paris, when I would look at every diagonal street corner and think of this painting. There are countless intersections like this in Paris, and so many rainy days. But there is only one Paris Street; Rainy Day. When I lived in Paris, I finally had time to track down the right place.

This iconic scene is located at the intersection of rue de Moscou and rue de St. Petersburg in the 8th arrondissement behind Gare St. Lazare, between Place de Clichy and Place de L’Europe. An easy walk from several Métro lines. I created a Google Map so you can check it out for yourself. Click on the street view and you’ll have the perfect view. 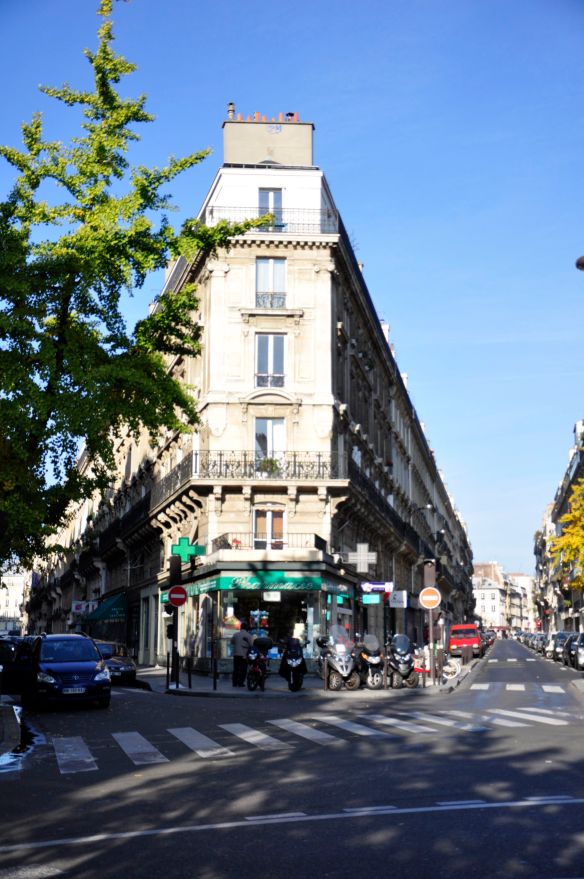 The scene of Caillebotte’s Paris Street; Rainy Day (1877). Funny that I should have captured this photo on a sunny day. It’s just not the same. (Not to mention the motorcycles and the lack of cobblestones!)

Rainy days in Paris can be beautiful. Or at least that’s what Parisians keep telling themselves so they don’t go bat-shit crazy during those long weeks of gloomy gray skies.

That’s what I told myself anyway. Check out these photos of mine and tell me you don’t agree. There’s just something about rainy days in Paris. . . . 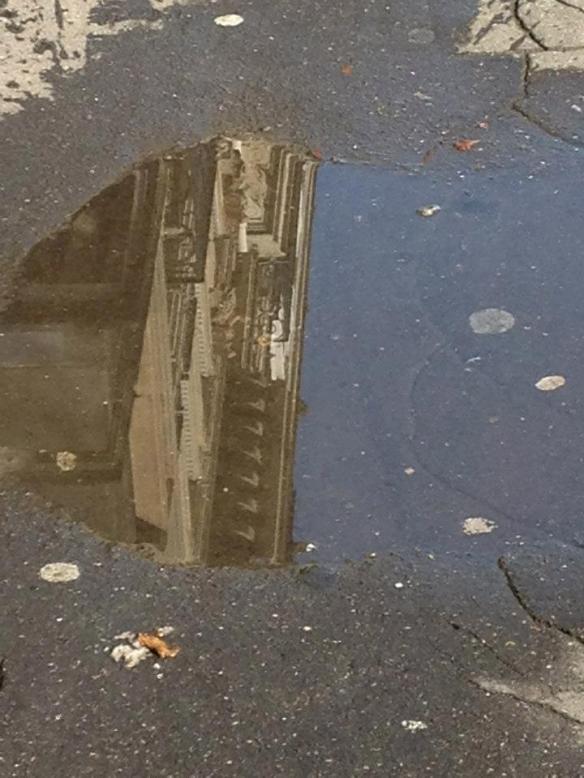 A Paris puddle on Avenue Kléber in the 16th 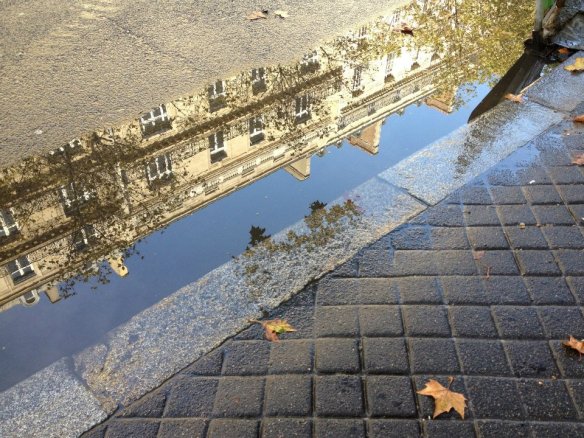 A Paris puddle on avenue Matignon in the 8th 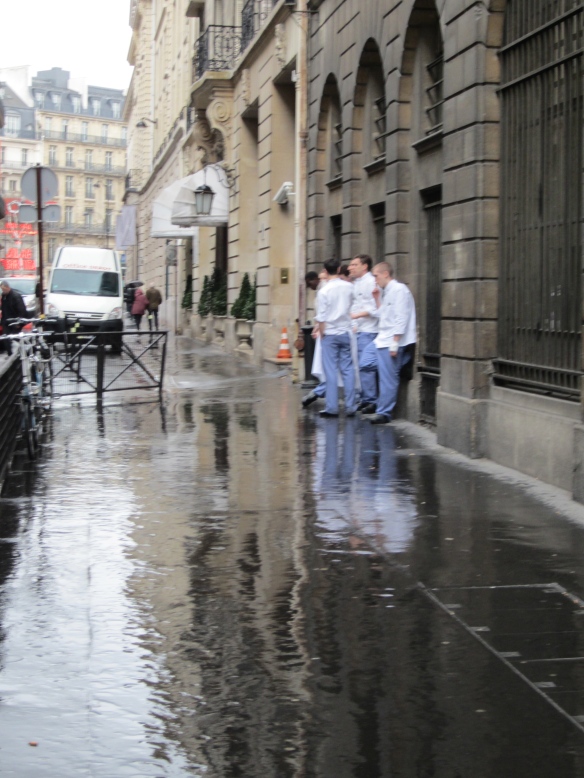 Rainy day, rue Cambon. Students on a cigarrette break from the Ecole Ritz Escoffier, across the street from Chanel Paris. 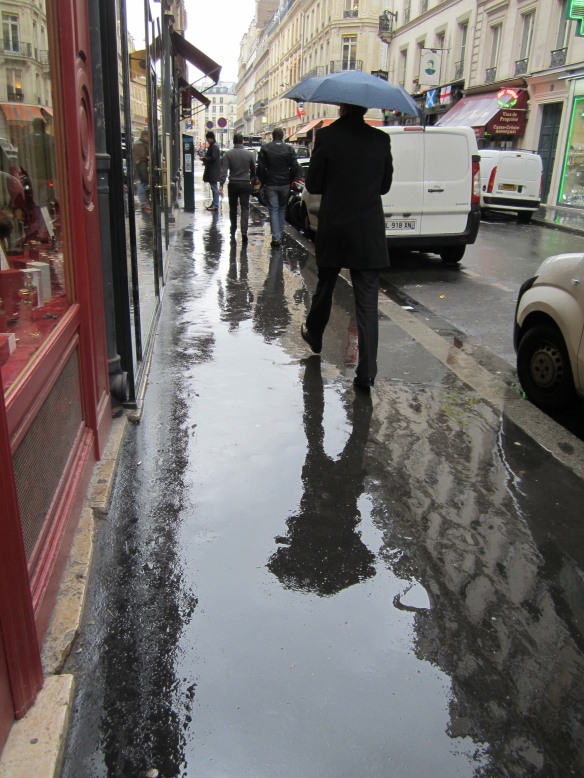 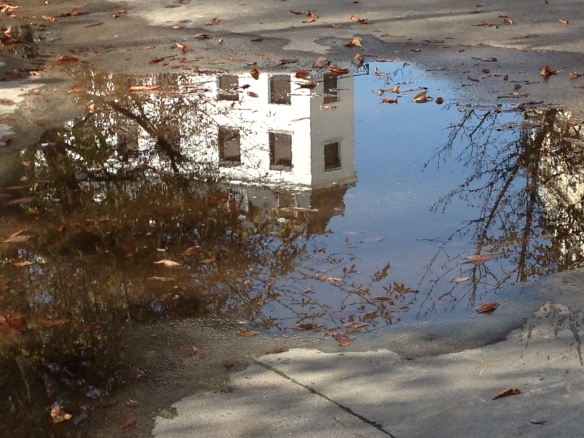 1 thought on “Rainy Days in Paris”