Mary Cassatt, Modern Woman Mural, as photographed in the Women’s Building of the Chicago’s World Columbian Exposition of 1893.

In 1892, Mary Cassatt and Mary MacMonnies, both of whom were American artists living in France, were commissioned to paint giant murals for the Chicago World’s Fair. Bertha Palmer, a Chicago philanthropist and wife of the rich and powerful Potter Palmer, had been named the President of the Board of Lady Managers of the fair, and was determined to fill the walls of the Women’s Building with original art by talented women.

Cassatt was not Bertha Palmer’s first choice. Palmer preferred the more traditional style of Elizabeth Gardner, an American painter who lived in Paris with the famous French academic painter William Adolphe Bourguereau. But Gardner turned down the commission, claiming that it would be too physically demanding for her at the age of 55.

Sara Hallowell, an American art dealer who had been appointed Assistant Chief of the Fine Arts Department of the fair, urged Palmer to consider the more modern Cassatt. Although Bertha Palmer was familiar with her work, Cassatt was not well-known in America at the time, despite the fact that she was nearly 50 years old and had been painting for over 30 years.

Cassatt had mixed feelings about the commission, as shared in a letter to her friend Louisiana Havemeyer:

I am going to do a decoration for the Chicago Exhibition. When the committee offered it to me to do, at first I was horrified, but gradually I began to think it would be great fun to do something I had never done before and as the bare idea of such a thing put Degas into a rage and he did not spare every criticism he could think of, I got my spirit up and said I would not give up the idea for anything.

Degas considered “decorations” such as mural work beneath a true artist, but his opposition “got her spirit up” and convinced her to accept the commission. The theme was Modern Woman, which Cassatt would explore with the smoldering feminist point of view of a successful single female at a turning point in history.

Cassatt’s mural was a 58×12 foor triptych that featured women picking fruit, dancing, playing instruments and interestingly, young women chasing a flying nude female figure. Cassatt fully intended all of the underlying feminist symbolism (women picking the forbidden fruit for themselves and passing it on; young women chasing fame, being chased by a gaggle of geese) but the subtext and the modernism of Cassatt’s technique shocked Chicago audiences.

Cassatt received horrible reviews for the work, which disappeared after the fair and has never been found. Some speculate it was destroyed while in storage at the end of the fair, while others hope that it might still be uncovered in the back room of some small midwestern college.

I already knew the story of the mural when I set out to see Chateau Beaufresne, Mary Cassatt’s country home in Le Mesnil-Theribus, feeling a special connection between my hometown of Chicago and France. I also knew that Cassatt didn’t buy Chateau Beaufresne until 1894, so I knew she didn’t paint the mural there. In fact, Cassatt painted the mural at another country home that she rented in nearby Bachivillers, France. I was determined to find it.

Bachivillers, Mary Cassatt’s summer home in 1891 and 1892, not far from Le Mesnil-Theribus

Chateau Bachivillers, Mary Cassatt’s rental home north of Paris during the summers of 1891 and 1892. This is where Cassatt painted the Modern Woman Mural for the Chicago World’s Fair of 1893.

I never would have found the right house were it not for the help of Marianne Caron of the French organization Les Amis de Mary Cassatt. The home is privately owned, and there are no plaques or commemorative signs to identify it. Caron and I drove over from the nearby village of Le Mesnil-Theribus on a narrow little country road surrounded by farmland. Caron confirmed that this would have been the very same road on which Cassatt and her father would have traveled in their horse-drawn carriage. The smell of moist soil rose from the newly tilled fields. It felt like we were a million miles from Paris and decades – if not centuries – back in time.

Caron told me that the current owners of Chateau Bachivillers are aware of the house’s history and have actually hosted a Mary Cassatt lecture in the home, which Caron participated in.

And then I asked her about the trench. I had read that Cassatt built a special outdoor glass-roofed studio at Chateau Bachivillers in order to complete the mural. She had workmen dig a giant 60×6 foot trench into the soil below. This way, Cassatt – who was almost 50 years old – wouldn’t have to climb on ladders to reach the upper portions of the mural. Instead, the workmen would lower the mural into the trench.

I wondered, would remnants of the trench remain all these years?

While I wasn’t able to enter the property and examine the yard for myself, Caron told me the story about the time she did exactly that. When she was there for the Mary Cassatt lecture, she walked out to the side yard (indicating to the left of the home) with another local expert, and they spotted some disruption in the soil. However, something about its location made them skeptical, it being more likely that the studio would have been located to the rear of the chateau where there was no evidence of a trench.

As I stood outside Chateau Bachivillers, I tried to imagine Cassatt’s trusted friends and family arriving to witness Cassatt’s progress on the mural, including Chicago art dealer Sara Hallowell, Paris art dealer Paul Durand-Ruel, and possibly Cassatt’s friend and neighbor in L’Oise, Camille Pissaro. Cassatt longed for Degas’ advice, but never invited him out to see the mural for fear of his savage opinions.

In the end, Cassatt was paid $3,000 for the mural, which was the same amount that men were paid for their similar murals for the fair. It was enough to compensate Cassatt for her many expenses, including the cost of the models, the workmen, the studio and the trench. Cassatt was able to shake off the criticism of the unsophisticated American audience and continued to work quite happily on new paintings with some of the same models. Just as the Chicago World’s Fair closed, Cassatt’s first major Paris exhibition opened at Durand-Ruel’s gallery, featuring 100 of her paintings.

For further reading: Eve’s Daughter/Modern Woman: A Mural by Mary Cassatt by Sally Webster and Mary Cassatt: A Life by Nancy Matthews 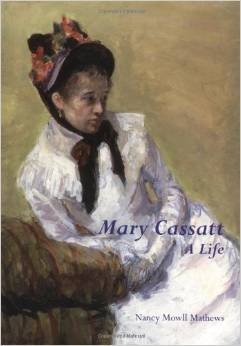