I first heard about Allison Pataki’s book The Accidental Empress from Barbara Rinella, a Chicago area friend and “book dramatist.” If you’ve never seen Barbara perform, check out her website, she’s a real tour de force. Hilarious and salty, Barbara dresses up like the character from a book — Marie Antoinette, Camille Monet, John Adams, to name a few — and gives a highly entertaining book review, as only a former high school English teacher could. She’ll be reviewing Accidental Empress and performing as Empress Sisi starting in the fall of 2015. You can catch her throughout Chicagoland, maybe on a cruise ship, and if you’re lucky, in a town near you.

I have a special interest in Empress Sisi after reading Accidental Empress and touring through Austria this summer. Sisi seemed to pop up everywhere on our travels. My husband finally asked, “Who is this Cissy anyway?” I answered: “It’s ‘Sisi.‘ She was  Empress Elisabeth of Austria, but so tragic, the Princess Diana of her time.” He gave me that look — you know, the ones husbands give when they realize they’re getting dragged into another museum.

Such is life with a history major.

The first stop on our Accidental Empress itinerary was the town of Bad Ischl, just an hour or so east of Salzburg in the Salzkammergut region of Austria. Bad Ischl was the summer playground of the Austrian aristocracy. As readers of the book know, this is where Elisabeth of Bavaria first met Emperor Franz Josef of Austria. Elisabeth was just 15 years old at the time, invited to Bad Ischl as a member of her older sister’s bridal party. Allison Pitaki’s book is perhaps the most fun when we see the (prettier, spunkier, more athletic) little sister steal the (older, quieter, bookish) sister’s betrothed. Wedding plans are quickly swapped out and “Sisi” becomes the accidental Empress of Austria.

Sisi’s mother-in-law bought a beautiful villa in Bad Ischl to give to Sisi and Franz Josef as a wedding gift. Over the next few years Franz Josef had it made into the beautiful Kaiservilla that still stands today. The palace, its beautiful grounds and Sisi’s little Tudor tea cottage are open to the public. It would make a great day trip from Salzburg or a good stop for lunch and a tour on the scenic route from Salzburg to Vienna.

After buying a ticket to the Kaiservilla you walk across the Kaiserbrücke, a  lovely steel arch bridge over the Ischl River. The stream is fast moving and fresh, just like it must have been in Sissi’s day.

A view of the front of the Kaiservilla in Bad Ischl. It is painted an imperial yellow similar to the Schonbrunn Palace in Vienna. 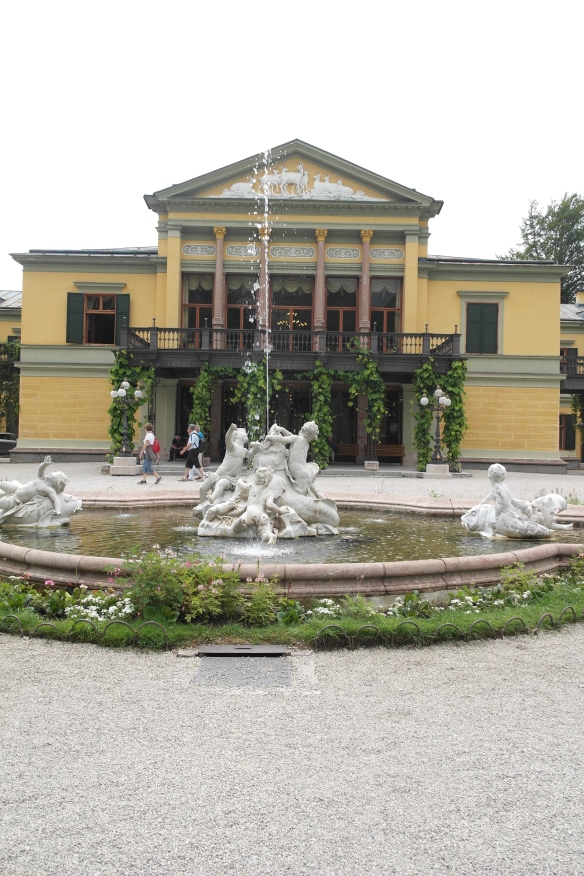 The gravel driveway brings you into a lovely symmetrical plaza in front of the Kaiservilla. If you’re lucky you won’t have too long to wait before your timed guided tour of the villa begins.

This hunting statue called “The Listener” stands in the lawn in front of the grounds and gardens across from the villa. Emperor Frank Josef was a big hunter. The inside of the villa (no photos allowed) contains many hunting trophies, including antlers and deer heads. 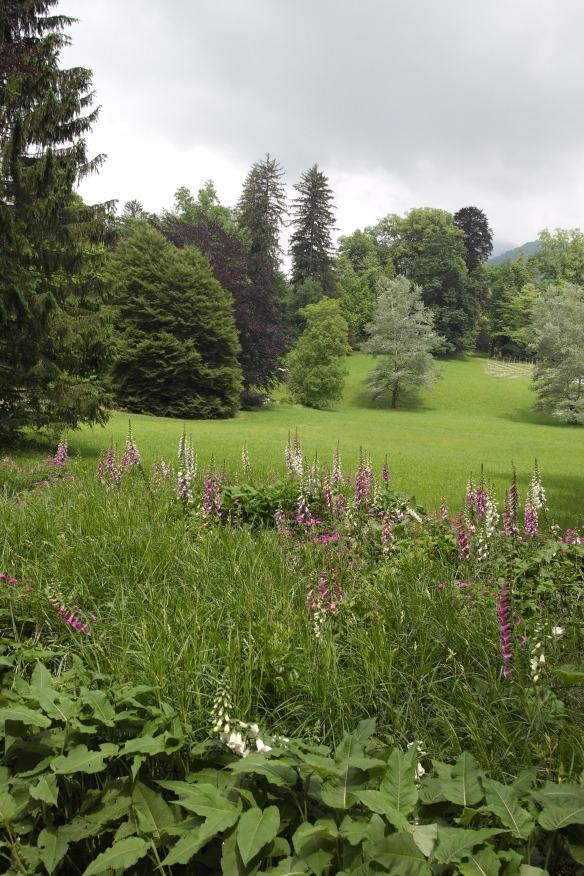 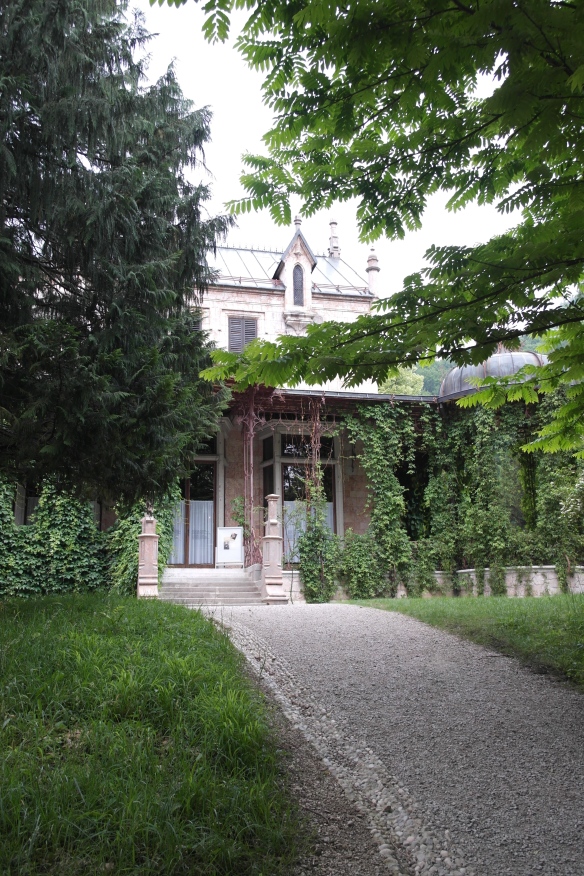 Your first glimpse of Elisabeth’s Tea Cottage as you walk up the pebbled path from the palace. It reminds me a little bit of Marie Antoinette’s Hamlet at Versailles (although on a much smaller, less crazy scale). It must have offered a welcome feminine retreat away from the uber-masculine trophy hunter vibe of the main palace.

The beautiful front door of the Tea Cottage

All around the exterior of the Tea Cottage you can read signs and see photographs from Elisabeth’s time at Kaiservilla. She was considered quite the beauty.

This sign (in English and German) tells about the “imperial betrothal” at Bad Ischl.

After a couple-few hours in Bad Ischl there would be time to grab a quick bite and head back to Salzburg or to continue to drive on to Vienna, as we did.

In Vienna, you won’t want to miss the Imperial Apartments and the Sisi Museum at the Hofburg Palace, where Elisabeth and her husband Franz Josef lived (but not necessarily very happily) from 1854 until her death in 1898. 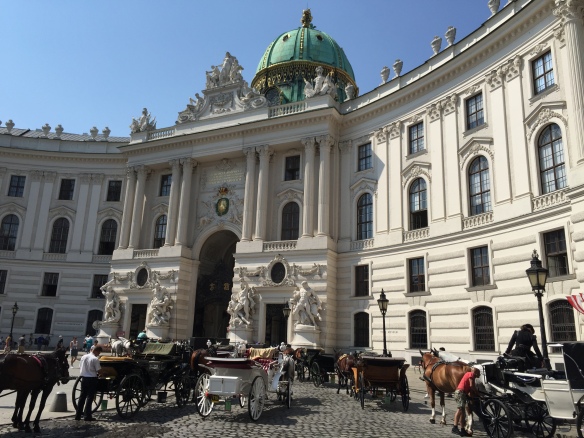 Hofburg Palace in Vienna. You can buy tickets to visit the Imperial Apartments and the Sisi Museum. Highly recommended!

An original portrait of Elisabeth and her extraordinarily long hair hangs in the Imperial Apartments above a desk.

And of course, no itinerary is complete without a stop at the gift shop. The Sisi Museum Gift Shop offers every souvenir you can imagine, and then some. No, I didn’t buy a Sisi Fan, but I did pick up a few postcards to toss into my scrapbook.

I recently heard that Allison Pataki is currently writing a sequel to Accidental Empress, which I can’t wait to read. Maybe you’ll have time to plan your own Empress Elisabeth Itinerary in time for the next book!