I found another lovely art history novel that I think you really must read. If you loved Girl With a Pearl Earring by Tracy Chevalier, chances are you’re going to enjoy this one too.

I love novels based on famous paintings (the list goes on and on: The Goldfinch, The Painted Girls, The Girl in Hyacinth Blue, The Luncheon of the Boating Party, so many that I think I need to do a follow-up post). But still, I couldn’t help but wonder, why would Nina Siegal choose this painting to write about? After all, it’s a bunch of Dutch guys goggling over a cadaver, right?

The story behind a public autopsy in Amsterdam in the 1600s seems like a difficult subject for a novel, certainly less approachable than writing about Vermeer’s pretty girl with a pearl earring. But Siegal was meant to write this story. She grew up with a reproduction of this painting in her father’s study and has been intrigued with it all of her life.

Siegal was drawn into reading nonfiction accounts of Rembrandt’s life as well as the people and the cadaver pictured in The Anatomy Lesson. There were conflicting stories about the people behind the painting, which left Siegal a great deal of creative freedom to plan her own narrative. I think she did a marvelous job.

The story is told from alternating points of view including Rembrandt, Dr. Nicholaes Tulp, the French philosopher René Descartes, the dead man, a coat thief named Aris Kindt, as well as Aris’s sweetheart Flora. Each character adds interest and depth to the portrait, but it is the sympathetic love story between Aris and Flora that brings it to life.

When Rembrandt meets Flora and learns more about Aris’s story, Rembrandt is inspired to go far beyond the intent of the original commission – which was to make a portrait of the town’s elite Amsterdam Surgeon’s Guild – and to create a masterpiece that would honor Aris’s short tragic life. 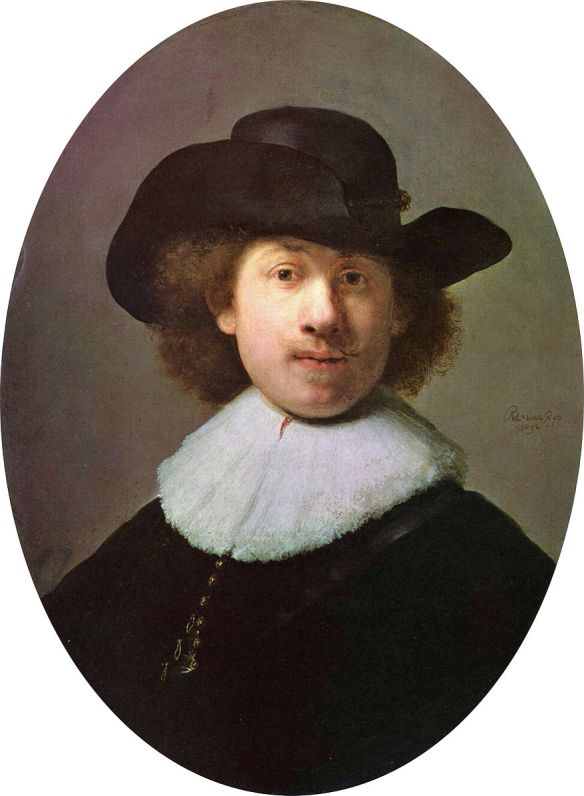 Rembrandt, Self-Portrait, c. 1632, Kelvingrove Art Gallery and Museum, Glasgow, Scotland. Rembrandt made dozens of self-portraits throughout his career, but this one was made the same year he painted The Anatomy Lesson. It is the first portrait where he is starting to look like a successful painter. The success with The Anatomy Lesson did indeed launch his career.

I guess it’s no surprise that the scenes where Rembrandt was actually planning and executing the painting were my favorites. Siegal did a beautiful job of explaining how Rembrandt used highlights to create the mood and focal point of the scene, and why he didn’t display the body cut wide open during the autopsy.

I brought my lantern closer to the easel again. What if I were to illuminate Adriaen, to bring him into the light? If he were not sliced open and degraded but instead elevated and lit? What if I did not show the power of the men over him but his own power over them?

As I continued to dab my paintbrush into the Kassel earth and bone black, I recognized what was possible through this portrait. I could make a broken man whole. I added some lead white to my palette and painted on, . . . adding color to the flesh so that it was pristine.

Reading this book you get a sense that young Rembrandt is at a turning point in his life, and that he is about to become the master painter that we all know today. When Siegal has him pick up his paintbrush to finish The Anatomy Lesson, you feel as if this is the moment that his genius was sparked.

Most art travelers know that Amsterdam is the home of the Rijksmuseum and the Van Gogh Museum. But if you’ve never been to the Rembrandt House Museum in Amsterdam you really need to put it on your Art Travel Bucket List. It’s a complete gem.

Rembrandt bought the house in 1639, just a few years after he painted The Anatomy Lesson, the same year he was commissioned to paint Nightwatch. He was living large, but only for the next 15 years. He went bankrupt in 1656 and was forced to auction off his house and assets. Luckily, the house was never torn down and was bought by the city of Amsterdam in 1906. It has been beautifully restored to the condition it would have been in during Rembrandt’s day, including many reproductions of his own and other paintings he collected. The museum staff offers daily art demonstrations in the etching and painting studios.

If you can’t get there soon, maybe you can still enjoy my photos. They’re not the best quality, but you get the idea. 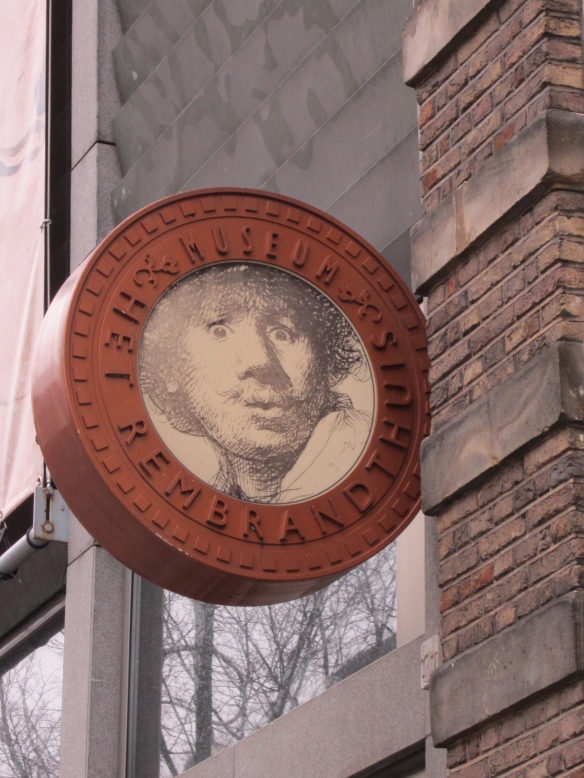 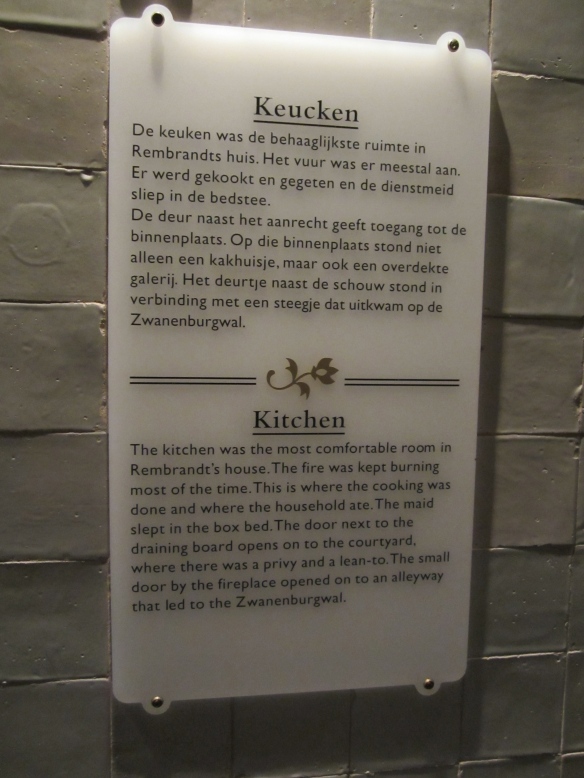 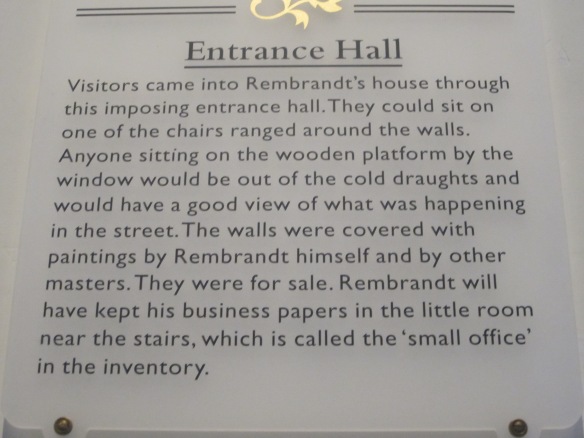 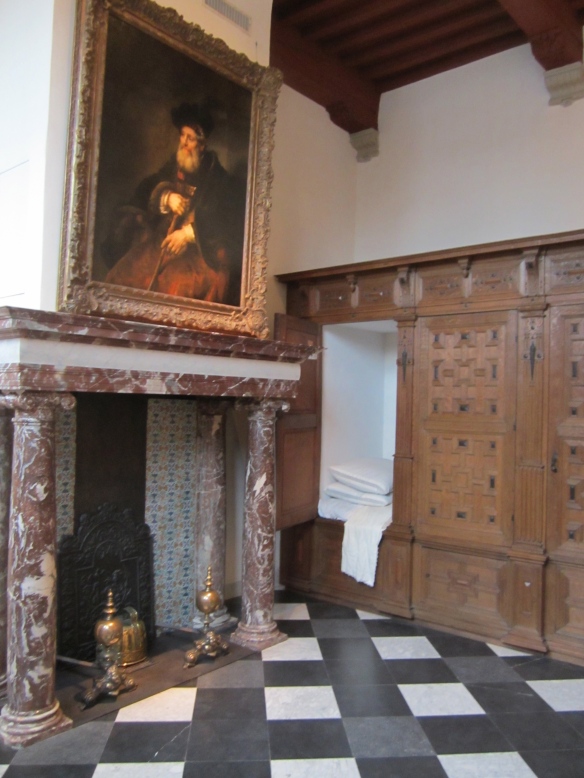 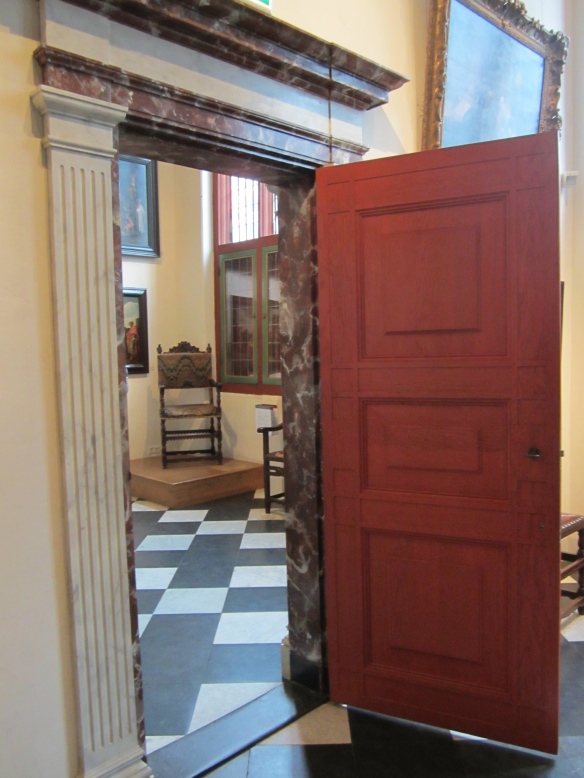 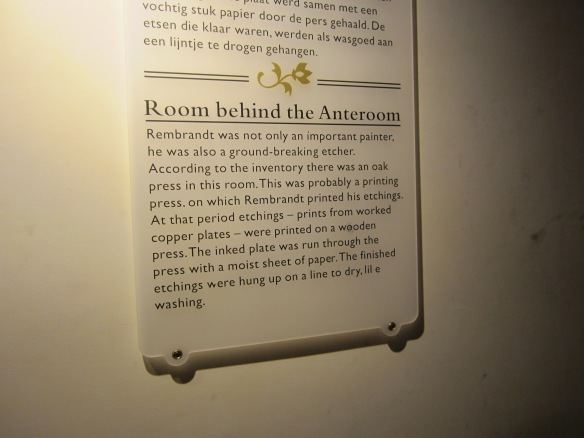 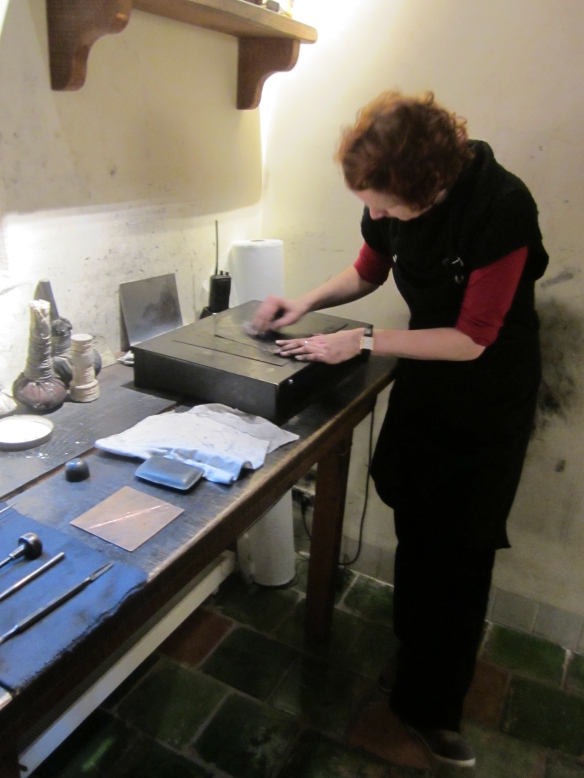 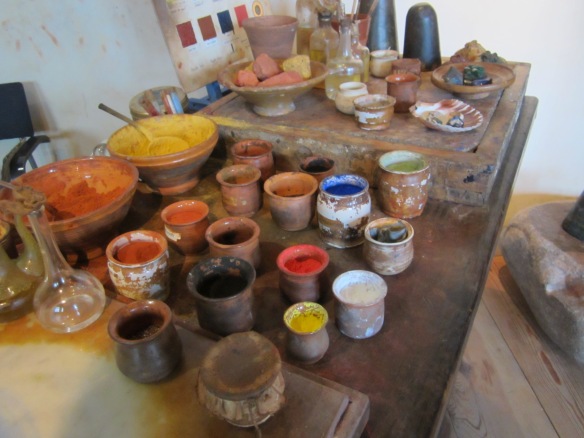 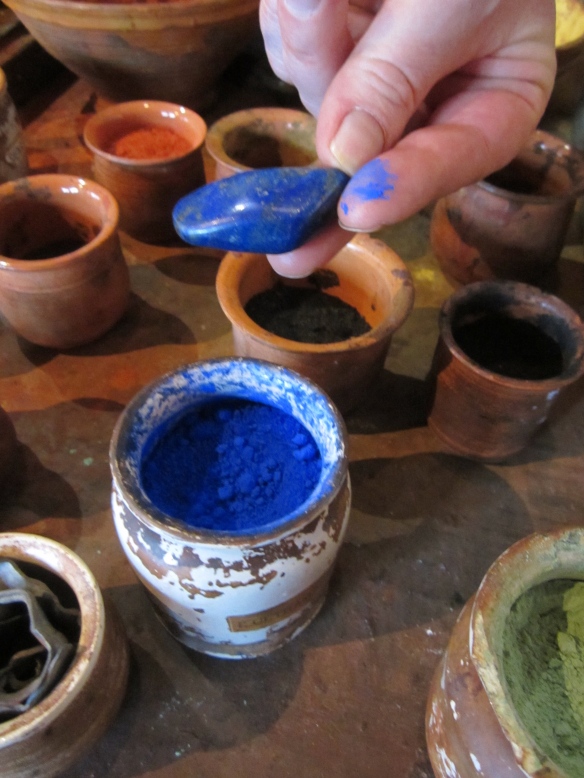 For further reading: I highly recommend another historical novel set in Amsterdam: History of a Pleasure Seeker by Richard Mason. Read my post about that book and the Willet-Holthuysen Museum in Amsterdam here.

History of a Pleasure Seeker – US paperback cover

History of a Pleasure Seeker (Knopf 2012)

Amsterdam. That is where I discovered an immensely pleasurable novel by Richard Mason.

Based on the exploits of a handsome young tutor in a grand Amsterdam canal house at the height of the Belle Époque, History of a Pleasure Seeker is like a fun, sexed-up Downton Abbey.

Canal houses in Amsterdam are a real pleasure to visit. On a recent trip, I toured the Willet-Holthuysen Museum at 605 Herengracht. I just love a good display of decadent Belle Époque excess.

Days later, I spotted a striking paperback novel in an Amsterdam bookstore. It had an eye-catching design in turquoise and black, with a row of gold-colored canal houses across the top. (Knopf released the U.S. edition pictured above in February 2012, but I came across the Orion UK paperback edition pictured here.)  I bought the book and dove right in at a nearby café. Only then did I learn that it was set in the very canal house I had recently visited. And just like the characters in the book, I quickly succumbed to its protagonist’s charms.

Entertaining and roguish, Piet Barol is the only child of a disappointing marriage between an uninspired Dutchman and a Parisian singing teacher. He grows up at the piano with his mother, where he learns the language of love and desire. Piet is attracted to the scent of power and is closely attuned to the distinctions of class. Piet nurses his ambition in private until he arrives at the front door of 605 Herengracht for a job interview.

Fortunately, Jacobina Vermeulen-Sickerts, the middle-aged lady of the grand canal house, is desperate to find a tutor for her emotionally disturbed but musically gifted young boy. She asks Piet to audition on the piano. Piet quickly intuits what Jacobina’s true needs might be, and chooses to play the second nocturne of Chopin in E flat major (“the only key for love,” said his mother long ago). It is cunning musical success. Jacobina is left breathless – as are most readers, I would predict – and Piet is hired on the spot. Flirtatious, ambitious and irresistibly handsome, Piet seizes the opportunity and seduces his way up the gilded curve. His exploits are fueled by the adrenalin of risk, but he is not completely foolish or unkind. He is generously sexy with both men and women, but he is not completely promiscuous. He is wise enough to resist the temptations of flirtatious daughters, desperate fellow employees and the paid-for pleasures of the demi-monde. Piet might be an amoral opportunist, but he is never unlikable. His dangerous liaisons are like a tight-rope display that we watch with horror and suspense. He is naughty and ambitious and we love it.

Go, if you can, to the Willet-Holthuysen Museum the next time you’re in Amsterdam. Until then, I hope you’ll enjoy the photos I was able to take on my own recent visit. Mason has done a great job of capturing the magic and power of the canal house at the height of its glory. It is a beautiful setting – almost a character in its own right – as it clearly deserves to be.

Willet-Holthuysen Museum, Herengracht 605, Amsterdam ("The house was five windows wide and five storeys high, with hundreds of panes of glass that glittered with reflections of canal and sky.") 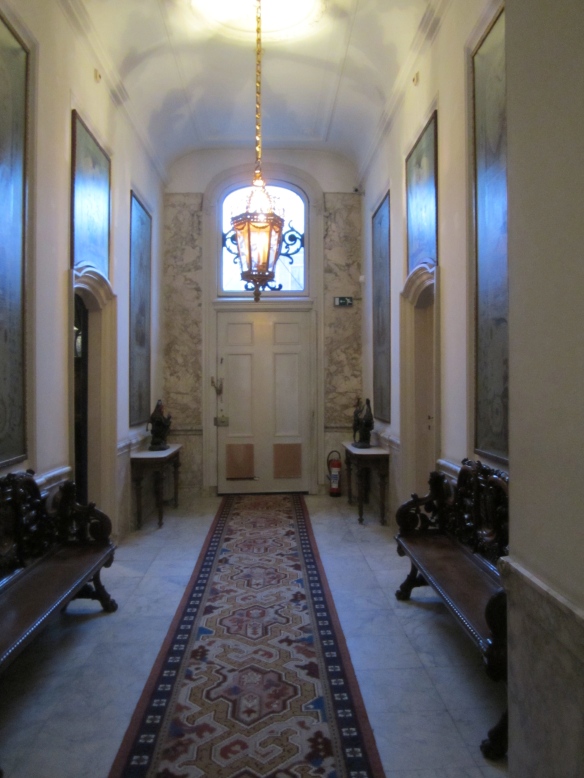 The Entrance Hall ("Piet did not wish to appear provincial, and his face gave no sign of the impression the entrance hall made.") 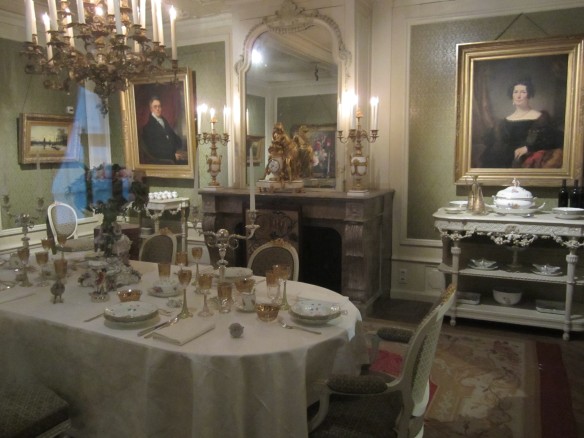 The Dining Room ("The table was Georgian, bought at an auction in London; the chairs were Louis XVI, resprung and upholsted in olive-green and white. The gilt salt cellars came from Hamburg, the clock on the mantelpiece from Geneva, the figures beside it from the Imperial Porcelain Factory in St. Petersburg. None of this detail was lost of Piet, who had a fine and instinctive appreciation of beauty.") 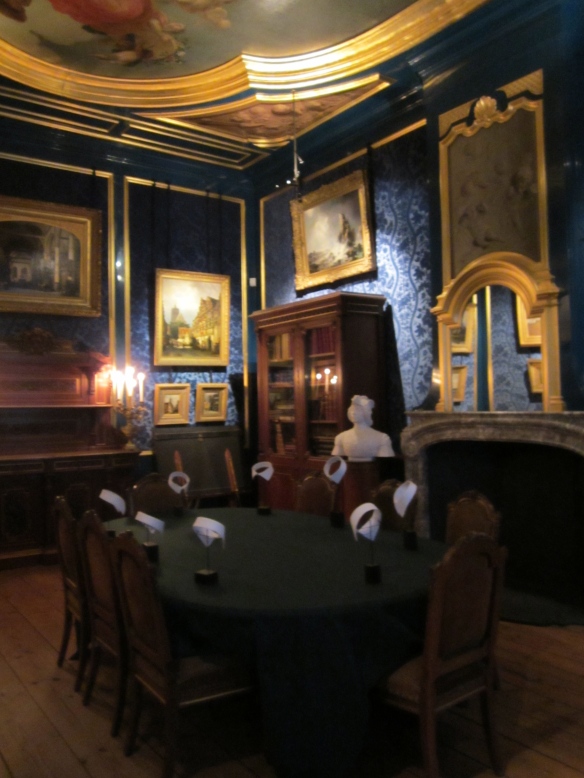 The Collector's Room ("...the room with the French windows, which was nothing but a tiny octagon, constructed of glass and stone and furnished with two sofas of extreme rigidity. It told him plainly that the splendours of the drawing room were reserved for men better and grander than he ...")

The Bedroom, the scene of an important climax in the book: ("Maarten took charge. 'My dear, let us go to bed.' He offered his wife his arm.")

Have you seen Richard Mason’s wonderful website? If you’re enticed to learn more, you can go there to listen to the music which is such a key part of the book. It is exactly what I wish for when I read a book with a strong musical element. Well done.

In case you noticed the strangely alphabetized paragraphs throughout this post, allow me to introduce you to two more wickedly fun characters in the book, Constance and Louisa, the two spoiled Vermeulen-Sickert daughters. As a co-employee explains to Piet: “Don’t let their politeness fool you. They’re vicious when they choose. . . . They like to humiliate people – but subtly, so their target never knows. Lately they’ve taken to leading their victim through a conversation in alphabetical order. Very funny when the poor fool doesn’t catch on.”

Just let me know if you caught on – perhaps by starting with K in the comments?