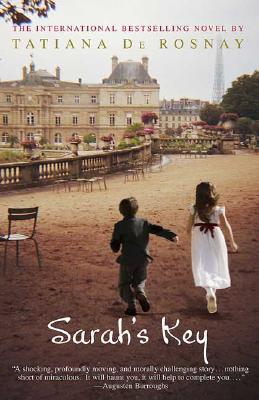 The original US cover of Sarah’s Key. (In which the Eiffel Tower strangely appears on the wrong side of Luxembourg Palace. Anyone else notice that or is it just me?)

Sarah’s Key by Tatiana de Rosnay was one of the first books I wanted to map out during my year in Paris. I read this book with my Chicago-based book club and never forgot it. I was determined to find the sites from the book and take some photos for my blog. My original post, with photos of the commemorative plaques and statues near the Eiffel Tower can be found right here.

I’ve been meaning to update that post for awhile now. Back in 2012, I made some new discoveries and went back to take some more photographs. How it happened is kind of cool.

I noticed that one of my favorite Paris bloggers (Richard Nahem of Eye Prefer Paris) had posted photos of the courtyard of the fictional apartment from Sarah’s Key. But wait! His photos were of 26, rue Saintonge in the Marais, and mine were from 32, rue Saintonge. Whoops!

I tweeted out to Richard (I’m @parisartclub, he’s @eyepreferparis) wondering about the mix-up, when who should tweet us back? Tatiana de Rosnay herself (what a treat!), explaining the reason for our confusion. Apparently, in the book Sarah’s address is 26, rue de Saintonge and in the movie it’s 32.

So then of course I had to go see the address from the book for myself. I good friend and fellow reader from Chicago was visiting and was game for a literary trek. We headed into the Marais (she had a recent travel article in hand about the hopping Haut-Marais) and we found ourselves near rue de Saintonge. “This way to Sarah’s house!” I pointed. Obviously, book lovers like me have a hard time distinguishing fact from fiction.

I found the bright blue doors at #26, just like Eye Prefer Paris had earlier. My friend and I also got the chance to peek in the courtyard, and we had a little “book club moment.” We looked up at the open windows, picturing Sarah’s old neighbor the music teacher, playing the violin as he sat in his window. Seriously, I think I wiped away a tear or two.

Here is the passage from Sarah’s Key that we recalled:

Outside, the girl saw a neighbor wearing pajamas leaning out his window. He was a nice man, a music teacher. He liked playing the violin, and she liked listening to him. He often played for her and her brother from across the courtyard. Old French songs like “Sur le pont d’Avignon” and `A la claire fontaine,” and also songs from her parents’ country, songs that always got her mother and father dancing gaily, her mother’s slippers sliding across the floorboards, her father twirling her round and round, round and round until they all felt dizzy.

“What are you doing? Where are you taking them?” he called out.

His voice ran across the courtyard, covering the baby’s yells. The man in the raincoat did not answer him.

At the sound of his voice, shutters began to open, faces peered out from behind curtains.

But the girl noticed that nobody moved, nobody said anything. They simply watched.

The fictional courtyard from the book Sarah’s Key at 26 rue de Saintonge, Paris. Can’t you just picture the nice man and his violin leaning out the window?

The plaque on a nearby school on rue des Quatre-Fils in the 3rd.  It says: “From 1942 to 1944, more than 11,000 children were deported from France by the Nazis with the active participation of the Vichy government of France and assassinated in death camps because they were born Jewish. More than 500 of these children lived in the 3rd arrondissement. A number of them went to the Ecoles Elementaires Filles et Garcons des Quatre-Fils.  Never Forget Them.

This is all probably a good reminder as we prepare to celebrate the 70th anniversary of the liberation of Paris on August 25, 2014. Ne les oublions jamais.