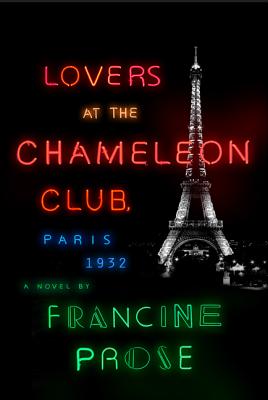 I couldn’t wait to get my hands on this book. I mean, just look at that cover. So hard to resist for a lover of all things Paris.

But I have to admit, the charms of the story resisted me for nearly 200 pages. While the structure of the book makes it feel as if it was enormously fun to write, it makes it quite a challenge for a reader to slip into. It is the story of a band of friends, acquaintances, enemies and lovers in Paris in the 30s and 40s. Their story doesn’t unfold, it demands that you piece it together for yourself, like a 2,000 piece jigsaw puzzle of a Picasso painting.

You hear the discordant voices of a number of strange and lively characters, from a Hungarian photographer named Gabor (modeled after the true-life Brassai ), an American expat writer (à la Henry Miller), a French baroness married into the Rossignol car dynasty, a French language teacher named Suzanne who works for the Resistance, and then most bizarrely of all, the alleged great-niece of a character named Lou Villars, a lesbian race-car driver, German spy and agent of the French Gestapo (a stand-in for the real-life Violet Morris). Yes, there’s a lot on the plate. 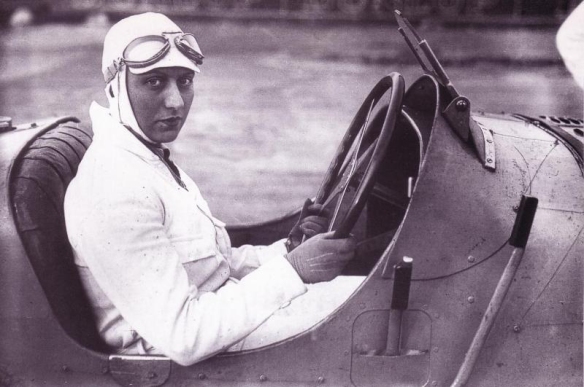 The characters are all drawn to a fictional Chameleon Club in Paris, a free-wheeling 1920s-40s era nightclub with singing acts by cross-dressing sailors and mermaids, men in drag, women in tuxedos, and an owner named Yvonne who parades around with a pet chameleon on her shoulder. When Gabor takes a photo of Lou Villars and her lover Arlette at the club, it is a clear shout-out to Brassai’s Lesbian Couple at Le Monocle, 1932 (Cleveland Museum of Art Collection).

A photo from Le Monocle, a lesbian bar in Montmartre in the 1920s-40s, via http://civillyunioned.tumblr.com

The fictional Chameleon Club is the perfect setting and a revealing title for a book about people who cross all sorts of lines in all sorts of ways. Especially when war comes.

That’s when the narrative shifts into a faster, more sinister gear. Lou Villars takes up professional race car driving on behalf of the Rossignols and becomes a public relations sensation. She dresses like a man and gets a double mastectomy to fit behind the wheel. But soon, enemies in France take away her license on the grounds that she is a threat to morality. Smelling opportunity, the Germans invite her to the 1936 Berlin Olympic Games and to dinner with Hitler. Lou is easily seduced into becoming a German spy, and agrees to travel through France seeking out intelligence such as the weakness in the Maginot Line. (Believe it or not, nearly all of this is a true story about the real Violet Morris.)

The stories about Lou Villars continue, and by now, you don’t care who’s narrating or why. You’re hooked into hearing about how the good people of the Chameleon Club endured and resisted the horrors of the Occupation, and how people like Villars could possibly rationalize the evils they perpetrated. We learn that Lou Villars (and in turn, the real Violet Morris) may have been involved in the Vel d’Hiv’ Round-up of 1942, and then became an agent of the French Gestapo, known for her violent interrogations of French resistance workers. Which would all be terrific fiction, but is actually based on the true story of Violet Morris.

Lou Villars becomes a notorious interrogator with the 93 rue Lauriston Gang, a group of French Gestapo gangsters who have been the subject of many books and films, including Louis Malle’s 1974 film, Lacombe Lucien and the 2004 television movie 93, rue Lauriston. The gang’s headquarters were located on a quiet little street in the 16th arrondissement of Paris. Lou Villars conducted her interrogations in the cellar of their building.

I first spotted the plaques for 93 rue Lauriston on my frequent walks through my old neighborhood in the 16th. In fact, the address was just across the street from one of my favorite boulangeries. I took photos of the plaques and went back to learn more about the horrible history of this neighborhood. 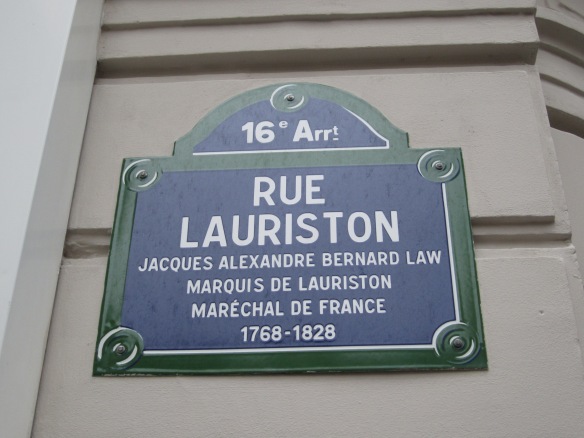 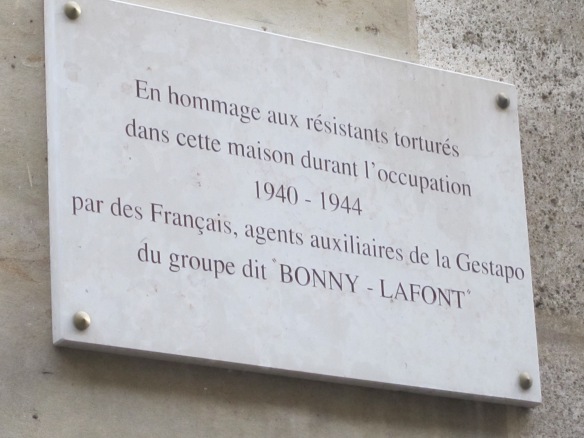 The plaque outside the former 93 rue Lauriston in the 16th arrondissement of Paris: In homage to the resistants tortured in this house during the occupation 1940-1944 by French agents, auxiliaries of the Gestapo, the group called “Bonny-LaFont”

At 97, rue Lauriston,  where a lovely boutique hotel now stands, there is a plaque commemorating one of the heroes who died trying to liberate the Quatier Lauriston. The hotel is just a few doors down from the French Gestapo house.

The plaque at 97 rue Lauriston: Here Died For France, August 25, 1944, Louis Moreau, FFI, Married, Father of his Family, Came from Bourg-la-Reine for the Liberation of the Quartier Lauriston. In His Memory: Those He Delivered.

Here’s my favorite little rue Lauriston boulangerie, which is just across the street from 93 rue Lauriston. It just goes to show how history and present day life go hand-in-hand in Paris. Maybe that’s why I love it so much.

The book ends without clear resolution, offering different versions about what might have happened to all of the friends and enemies from the Chameleon Club. To me, that was the most satisfying ending of all. Because if there is one thing that historians have learned about the aftermath of the Paris Occupation, is that truth and virtue are very slippery things. Kind of like a chameleon.

Related posts on this blog about World War II Reads:

In this blog post I share my own photographs of the plaques and memorials near the site of the old Paris Velodrome (Vel’ d’Hiv’), along with directions on where to find them.

Some V-E Day Reading – Paris During the Occupation: https://americangirlsartclubinparis.wordpress.com/2012/05/08/some-v-e-day-reading-recommendations/ 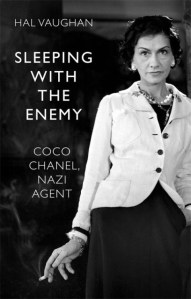 Crossing the Borders of Time: https://americangirlsartclubinparis.wordpress.com/2013/01/28/crossing-the-borders-of-time/ 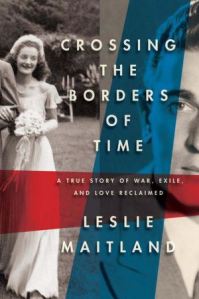 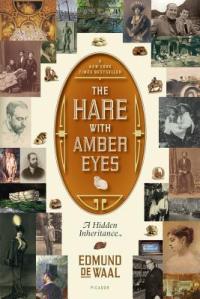 Pictures at an Exhibition: Art, War and Memory in Paris: https://americangirlsartclubinparis.wordpress.com/2011/12/09/pictures-at-an-exhibition-art-war-and-memory-in-paris/ 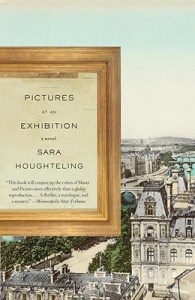