On recent travels to Austria, I remembered there was a Vienna connection to this book and I was determined to track it down. The Ephrussi family had owned a palace on the Ringstrasse. The last members of the Ephrussi family to live in it were Viktor, his wife Emma and their four children. You might remember from The Hare with Amber Eyes that Emma kept the family netsuke collection in a lacquered black cabinet in her dressing room.

After the Anchluss in 1938, the Nazis “Aryanized” the Ephrussi Palace and most of its contents. Viktor, Emma and their children made it out of the country alive, but both Viktor and Emma would die before the end of the war. What became of the palace after it was seized by the Nazis? Would it still be there? Who currently owns it?

I didn’t have to look far. A simple Google search took me to a Wikipedia page for Palais Ephrussi. It was there I learned that the palace survived World War II, although one wing had been destroyed. The building was in the American Sector of Vienna during the Occupation and housed the American Legal Council Property Control.

The Germans who occupied the building from 1938-1945 used much of the Ephrussi family furniture, as did the Americans during the Occupation, but “artistic and high-quality pieces that [were] unsuitable for office purposes” went to various museums in Vienna, including the Kunsthistorische Museum, the Naturhistorische Museum and the “Depot of Movables”. The Depot of Movables was used to furnish various museums and government offices in Vienna.

The surviving members of the Ephrussi family had to go to court to regain title to the building and its contents (reminding us of the litigation that was at the heart of Lady in Gold). By 1950, the palace and much of its contents were returned to the Ephrussi heirs. As we know, a maid smuggled the netsukes out of the house and hid them under a mattress. She made sure they were returned to the family after the war.

Unfortunately, Vienna had bad memories for the surviving members of Ephrussi family, so they chose to sell the palace. The building only sold for $50,000 (today’s dollars) due to its poor condition and Vienna’s economy at the time. For many years the building was owned by Casinos Austria.

Sadly, this palace now houses a Starbucks and a McDonald’s. It can be found at the corner of Schottengasse and Molker Basei, across the street from the University of Vienna. In the first photo below you can see the Votivkirche in the background.

One more interesting note about the Ephrussi family. I came upon a website that shows there were some additional pieces of Ephrussi family property that were discovered in the “Depot of Moveables” as recently as 2000 that are still available for restitution.

Austria has certainly taken a long time to remedy the wrongs of the holocaust.

Bronze table.
Taken from the ‘aryanised’ apartment of Viktor Ephrussi
Held ready for restitution since 1999

The Hare with Amber Eyes by Edmund de Waal has been out in Picador paperback since this summer, but it took a personal recommendation by a fellow art history friend to get me to finally pick it up and read it.

My friend and I toured the Stein Exhibit at the Grand Palais together a couple of weeks ago, and she couldn’t stop raving about this book. “Speaking of collectors,” she’d said, “there’s this fabulous book about a Jewish family’s collection of Japanese netsukes.” To which I said kind of sheepishly: “what’s a netsuke?” (De Waal pronounces it something like “netski.”)

In case you don’t know either, netsukes are small wood or ivory carvings that originated in 17th century Japan.  De Waal’s ancestor Charles Ephrussi, a wealthy art patron who lived in Paris at the height of the Belle Epoque, bought a collection of 264 netsukes when Paris was all abuzz about Japanese art. The Ephrussi collection now belongs to De Waal, and one of his favorites is the Hare with Amber Eyes, pictured above.

De Waal’s netsukes were owned and treasured by truly fascinating people. The story begins with the rise of the Ephrussi banking family in Odessa, and follows them from late 19th century Paris to 20th century Vienna, through the horrors of World War II and beyond.

Charles Ephrussi was a fashionable salon-going Paris aristrocrat, an “aesthete,” after whom Marcel Proust modeled his character Swann in Remembrance of Things Past. Charles Ephrussi was a friend and patron of Renoir, Monet, Cassat, Degas and more. The walls of his study on rue de Monceau were filled to the ceilings with impressionist paintings. 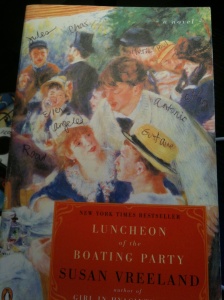 When I read that Charles Ephrussi had been invited to be a model in Renoir’s painting The Luncheon of the Boating Party, I couldn’t resist pulling out my own tattered copy of the book of the same name by Susan Vreeland. (Another great art history/Paris read to add to your list if you haven’t already.) Charles is the man in the top hat with his back to the viewer. See the names I scrawled on the cover, as I worked to keep track of all of the characters? In fact, Vreeland’s website offers a summary of each model including Charles. 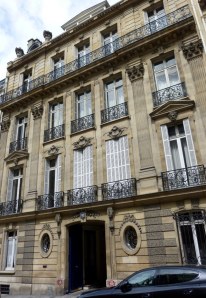 Charles Ephrussi is such an interesting character it might be worth a field trip to 81 rue de Monceau to see the former Hotel Ephrussi and the Parc Monceau neighborhood. I think I will follow the lovely travel guide by a like-minded blogger Parisian Fields, whose photograph of the former Ephrussi home is pictured on the left.

Getting to learn about Charles Ephrussi is just one of the many discoveries you will make while reading The Hare with the Amber Eyes. As the story moves on to 20th century Vienna, you will read about the rise of anti-semitism through the eyes of Charles Ephrussi’s cousin Viktor and his young beautiful wife Emmy, who received the netsukes from Charles as a wedding gift. Their children, including De Wall’s great uncle Iggie, grew up playing with the netsukes at their mother’s feet as she donned her gowns and jewelry. Before long, however, the Nazi’s seized power in Austria and stole nearly everything in the Ephrussi mansion, including their furniture, their extensive collection of books and their Old Master paintings. The family barely survived the war. The remarkable and heartbreaking story of how their netsuke collection survived the Nazi horrors is one you will just have to read for yourself.

The latest news is that De Waal has just published an illustrated U.K. edition of The Hare with Amber Eyes, which I am dying to see. If you can’t get a hold of the U.K. edition, you can at least enjoy the photos of De Wall’s netsuke gallery on his website. They’re enchanting, just like the book.

The Hare With Amber Eyes is a beautifully told story of art, family history and the connection between our lives and the objects we appreciate. Highly recommended.